ZIM is adding larger ships to its Zim Container Service Pacific rotation as former post Panamax ships become available for world wide trading. Previously confined to the Pacific and Suez routes, they are now able to transit the enlarged Panama Canal and can take up different routes. 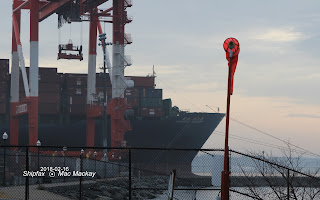 The bow of Hyundai Mercury looms over the south end pier 42  on a dead calm morning.

Today's arrival, Hyundai Mercury although no longer a giant is still an impressive 94,511 grt, 95,811 dwt with a capacity of 8562 TEU. Owned by Zodiac Marine of the UK it carries the name and markings of Hyundai Merchant Marine, the troubled South Korean operator. The ship was built in 2009 by - no surprise, Hyundai Heavy Industries in Ulsan, South Korea.

Hyundai Merchant Marine reports a loss of about $1bn in 2017, but is on the verge of ordering 12 new mega ships. Since the collapse of Hanjin, Hyundai has taken up much of the failed line's business, but is still only a small player on the world market (It is tenth largest). It now also has arrangements with ZIM and the 2M alliance (Maersk and MSC) for its ships to serve the US east coast.