An autocarrier with an unusual name is not necessarily an unusual sight in Halifax, but Glorious Leader must be one of the few that is (perhaps) tinged with irony. The term "Glorious Leader" has been attached to many figures over the years, usually sarcastically to demean the figure's actual leadership capabilities. Ranging from unpleasant bosses, bumbling political leaders to tinpot dictators, the subject earns the title by being incompetent and pompous. If the name is used as a serious term it may be found in poetry or sacred music of the Victorian era when hyperbole was in fashion. Nevertheless it is the name carried by this 57,692 grt, 20,999 dwt car carrier built in 207 by Stocznia Gdynia in Poland. 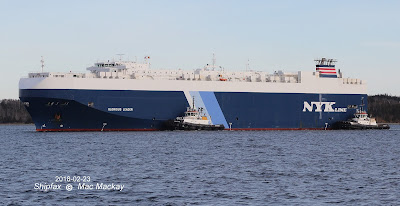 The tugs Atlantic Willow and Atlantic Bear take the Glorious Leader in hand to berth at pier 31.

The ship arrived today at pier 31to unload machinery and will shift to Autoport in the morning. Although sailing for NYK Line it is on long term charter from Ray Car Carriers and has a capacity of 6700 CEU.

A ship that is becoming a regular is Algoscotia. It appears to be running a shuttle service from Valéro, Lévis, QC to Imperial Oil. After its first arrival this year on January 9 (when it delivered to McAsphalt) it is now on its fourth round trip from Lévis (January 18, February 4 and February 15). During that time Sarah Desgagnés has also done two trips, and the number of foreign tankers coming from the US Gulf to Imperial Oil has declined considerably. A low CanadIan dollar and rising oil prices may be the key factor. 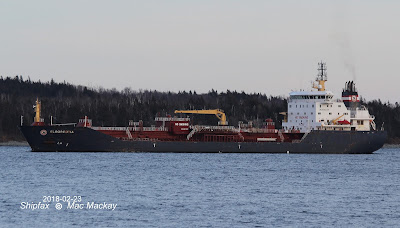 Algoscotia swinging in from the western channel and waiting for tugs eases up to the Ives Knoll area this afternoon.

Algoscoatia dates from 2004 when it was built by Jiangnan Shipyard Group. It measures 13,352 grt and 18,750 dwt and is Lloyd's ice class 1A. Algoma Tankers took over the Imperial Oil fleet in 1998, and distributed refined products from Imperial's Dartmouth refinery until was closed in 2013. After that their tankers were rarely seen there as the facility became a depot for local distribution to the Halifax area by truck. For the past several years most of the refined product stored at the depot was imported from Texas on foreign flag tankers.
Valéro, an Imperial Oil competitor operates the Jean Gaulin refinery in St-Romuald (Lévis) opposite Quebec City. It is Canada's second largest refinery after Irving Oil's Saint John facility. A large proportion of Valéro's crude comes from western Canada/US via pipeline to Montreal East and is shuttled by tanker to the refinery. A plan to source all its crude from North America (including the US Gulf) was to be in place by 2015 or 2016.