As far as picture taking is concerned, Bedford Basin was the action centre Friday evening.

Priority, a new to Halifax container ship berthed at Fairview Cove for THE Alliance. Also in port was the Atlantic Sea and in a rare occurrence it appeared that all four cranes were at work. Two cranes for each ship. The smallest crane was apparently able to work on the forward container cells of the Atlantic Sea. Usually this crane is too small to work most ships. 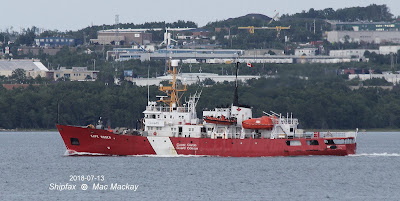 At BIO the DFO ship Teleost sailed after a brief stay in port, and Cape Roger took a few turns in the Basin following an alongside refit. Also at BIO for the past couple of weeks is Alfred Needler. All are normally based in Newfoundland.

And although no ships are scheduled for National Gypsum in the near future, there is certainly an adequate stockpile built up.