This week's arrival would have been Pantonio, which was added to the fleet in January, but has been replaced - at least for this trip - by an almost identical ship, the EF Ava. 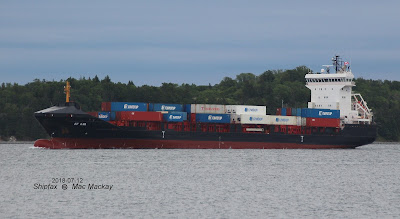 EF Ava is one of a series of about forty Chinese built ships of the Wawei 700 class. Measuring 7545 grt, 8169 dwt, it has a capacity of 698 TEU, including 120 reefers. Builders Wawei Shipyard in Fuzhou built the ship in 2008 as OPDR Rotterdam, but it was soon renamed OPDR Tanger (OPDR stands for Oldenburg-Portugiesische  Dampschiffarts Reederei). German owners MacAndrews, then Bernhard Schulte and now EF Ava Ltd have operated the ship under the flag of Madeira, the Portuguese international registry.

Sister ship Pantonia was built by the now failed Sainty Shipbuilding Corp of Jiangdu and it has worked for Dutch owners, Marlow Navigation, under Cyprus flag, so there appears to be no connection between the two ships except the standard design. 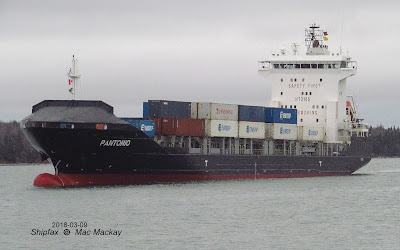 Pantonio is still shown on Eimskip's schedule for today's call and for August 2, but AIS indicates it is in Rotterdam, leaving little time for it to catch up.
Posted by Mac at 9:27 AM