News from the North

News from the north is generally hard to come by, but a few nuggets have escaped.

Ice conditions in the north are the worst in the last four years according to one report. They are so bad that even Fednav, have had to resort to reinforcements to make up for delays. Their Arctic is contracted to transport nickel concentrates from the Raglan Mine through the port of Deception Bay to Quebec City. However ice was so thick that the ship was delayed from June 1 to June 17 and they risk not being able to transport the required quantities of the ore, both to keep the mine operating, (stockpiling is limited at the port) and to feed the smelter in Sudbury.  They have therefore applied for a coasting license to use one of their foreign flag ships to make one trip in September or October to make up the potential deficit.

Speaking of Arctic this significant ship is due for retirement in 2020, and its replacement has been ordered from  Japan Marine United Corp Shipyard  (the merged Universal and IHI). 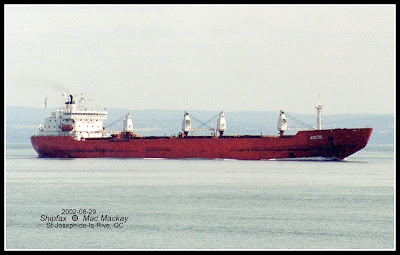 It was built in 1978 by Port Weller Dry Dock initially to serve the Nanisivik zinc-lead mine on the north coast of Baffin Island. In 1984-85 it was rebuilt as a combination ore / bulk / oil /carrier with a new bow. It then loaded oil from the Bent Horn field on Cameron Island, transshipping it at Rae Point to Imperial Bedford for refining in Montreal. The ship also landed some of the oil in Halifax for refining. 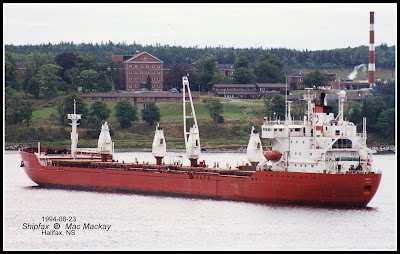 For some reason two of the cranes are missing their booms.

In 2007 the ship went to Jiangyin China for life extension. The work was to allow the ship an extra ten to twenty years. It then went back to work running from Deception Bay, on Hudson Strait, to Quebec City during the eight month shipping season. 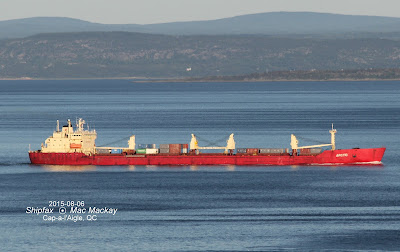 Arctic also carries general cargo in containers to provide supplies to the mine.
Fednav operates two other ice breaking bulk carriers in northern waters. Nunavik and Umiak I, the most powerful ice-class bulk carriers in the world. 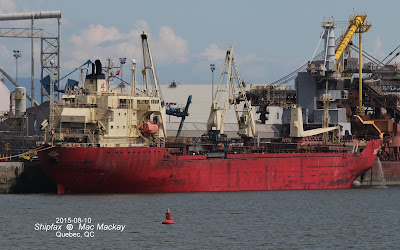 Meanwhile the number of pleasure craft passing through northern waters is exploding. In 2017 no less than 23 pleasure craft completed a northwest passage. Two commercial passenger ships, three non-government icebreakers, two cargo ships and a tanker also made northwest passages. All this is on top of the necessary re-supply and ore extraction voyages to the north, and several other passenger ships that made incursions into the arctic waters.

On July 16 the yacht Ice Angel (registered in Douglas Isle of Man) sailed for Nuuk, Greenland, the jumping off point for a Northwest Passage. Built in 2009, and previously named C9 and Cloud 9, the 1307 grt vessel was built by CNM Yachts of Cherbourg, France, and refitted in 2017. It has a steel hull and aluminum superstructure. What specific features it may have for arctic work is not known. 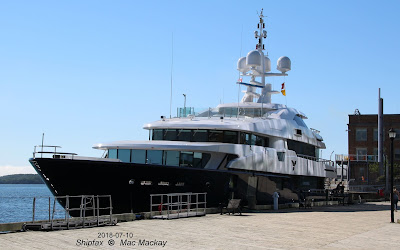 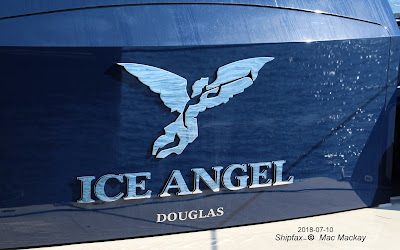 Ice Angel with some of its attendant craft leaving port.

It is the second vessel to sail from Halifax recently giving Nuuk as destination. The previous one was the sailing vessel Kamaxitha which left port July 8.

As reported in Tugfax numerous cargo ships are employed each summer to deliver cargo to remote communities. Most of these places have no port facilities, and cargo must be landed by barge. The ships carry the barges and small tugs to handle all the cargo. 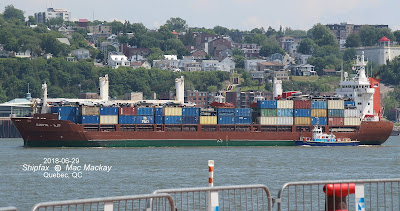 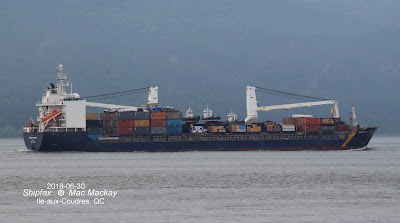 Other companies such as Woodward's Coastal Shipping also operate tankers in northern supply. All this activity will stretch the capabilities of the Canadian Coast Guard to cover such a vast area.