There was lots of activity in the harbour over the weekend as usual. Among the more interesting:

The small asphalt / bitumen tanker Feng Huang AO sailed on Saturday from the McAsphalt dock in Eastern Passage after delivering a cargo. Since it is paving season, demand for the commodity is high, and Irving Oil, among the producers have chartered the a US tug and barge combo Coho and Penn No.92  for two trips under a coasting license. One trip was last week and another is to follow in August. However McAsphalt needed more so brought in another load - probably from the Caribbean on Feng Huang AO.

Feng Huang AO makes the turn around Ives Knoll as it heads to sea and Tarragona, Spain, in ballast.

The ship is registered in Hong Kong and was built by Qingshan Wuhan in China in 2016, with tonnages of 10,377 grt, 12,799 dwt, and has the extra boilers and equipment needed to keep the cargo hot. Among the more interesting features of its design are the full width bridge and the main deck which slopes upward towards the accommodations and toward the forepeak.

In a reversal of the usual pattern the tanker Atlantic Breeze arrived from Saint John, NB. Usually these foreign flag product tankers come from the Netherlands directly to Halifax, then on to Saint John. 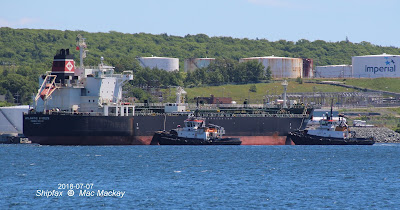 Tugs assist the Atlantic Breeze alongside Irving Oil's Woodside terminal. Not seen is a third tug, Roseway, operating as line boat to take the ship's headlines to a shore bollard.

Imperial Oil had only just cleared the tanker Seabreeze from its number 3 dock - so there was lots of breeze on a hot day.

Sunday was likely the busiest pleasure craft day of the year in Halifax harbour - not just in sheer numbers, but also in tonnage.

The container ship Berlin Bridge managed to thread its way in, despite having to make at least one warning signal for an inattentive sail boat.

Once round George's Island headed for the ferry track, and still well clear of other vessels it passed the monster yacht Kamaxitha getting underway from its berth at Purdy's wharf and heading for sea. 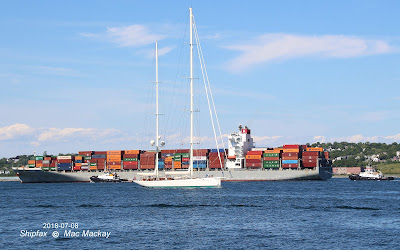 Built in 2012 by Royal Huisman the all aluminum vessel has an overall length of 53.75m (bowsprit included) and 41.22m at the waterline. Its breadth is variously reported, but seems to be 9.07m. Displacing about 270 tonnes, it features all the excesses one might expect on a vessels of its size. 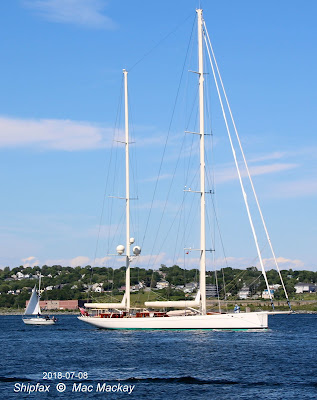 It put to sea using its 805 bhp MTU main engine, but may have decided to sail once outside the harbour. It gave Nuuk, Greenland as its next port - and why not. Its air draft is reported to be 57m. Incidentally the maximum air draft under the Angus L. Macdonald Bridge is 46.9m.