A busy Monday brings up a number of interesting developments.

The merger of the three Japanese container lines, K-Line, MOL and NYK to form Ocean Network Express, called ONE, has included building some new ships, but there will be a lengthy transition for existing ships to adopt common livery and for the introduction of the brand on containers. The merger, which started in 2016 came into effect in October 2017. 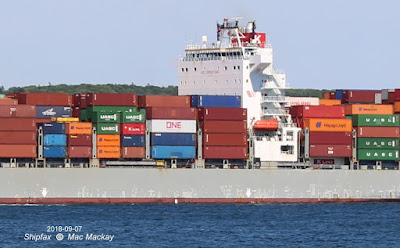 Yesterday a white ONE box was spotted on the inbound Berlin Bridge, a K-Line charter from Seaspan International.. However the real news was today's spotting of a new ONE dry container. 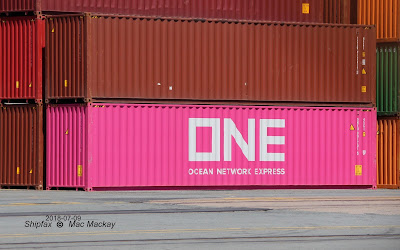 There has been some discussion in the shipping industry about the new ONE colour. Called cherry blossom magenta, it is traditionally a symbol of spring in Japan. However there is the question of the practicality of maintaining the colour. The general consensus seems to fit into the "What were they thinking" category. ONE has some ships in service now with this colour applied to the ship's hull. Can't wait to see one here.

ONE is a member of the THE Alliance with Yang Ming and HAPAG-Lloyd, so we are sure to see one someday.

Rebranding is also afoot in the oil distribution business in Atlantic Canada, with Irving Oil purchasing the Ultramar gas stations and convenience stores in the region. 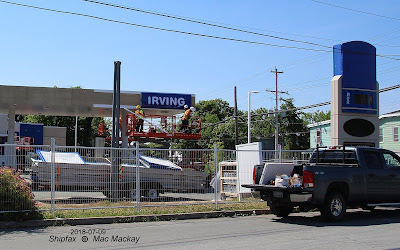 Workers swarm over a former Ultramar station and get the Irving sign into position.

This will likely result in more business at Irving's Woodside marine terminal in Halifax harbour. 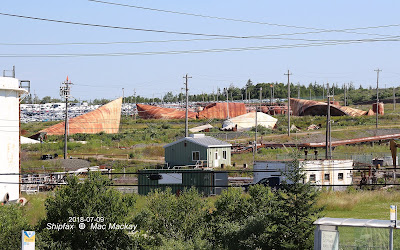 Old tanks coming down at Valero, with cars in the background.

The stations were previously supplied by Valero, and I note demolitions at their Eastern Passage tank storage facility. Valero still supplies Petro-Canada, and perhaps other gas stations in the area from their refinery in Lévis, QC, but  the local facility is underutilized. The site of the former Gulf Oil refinery - long since shut down - is right next door to Autoport, and they allow Autoport to use some of their land already. Despite a huge expansion to Autoport's storage facility recently, they will likely do a deal for more.

With no refineries in Halifax it is rare to see a crude oil tanker, particularly a fully laden one. Today's arrival of the Malta flag Patroclus involved some very careful navigation. Despite the tide being relatively high, the ship took to the deep water western channel  and even deviated from that to avoid a high spot. Other ships and boats were cautioned out of the way and the pilot boat stood by off middle ground to help guide the ship. Harbour regulations require two pilots and two tugs for tankers of this size.

Patroclus returns from the deep water western channel to the main channel as the supplier Venture Sea and a pleasure craft move toward the western channel. The stern escort tug Atlantic Oak is out of sight moving the ship's stern.

It is not immediately apparent where the ship is coming from, but its course approaching Halifax was from the south. Its destination will be revealed when it departs later this evening - watch for an update

The ship was built by Hyundai Ulsan in 2009 as Astro Patroclus but was renamed in the same year. At 79,890 grt, 158,267 dwt it is not the largest ship to call in Halifax, but it may be one of the deepest. Due to the position of tugs and shadows I was not able to read the draft marks, but the web says it is 17m (55.7 ft). However based on the way the ship was handled I suspect it was in excess of 17.7m (58.07 ft) - the figure requiring special permission from the Port. Update: on departing the ship reported a draft of 16.95m, and gave Saint John, NB as its destination.

Patroclus brings up in number one anchorage in preparation to take bunkers.

Bishu Highway was unloading cars at Autoport this morning when BMW announced that it is raising car prices because of the current trade and tariff war. What this uncertainly will mean for Autoport, and Canadian car buyers remains to be seen, except it is likely not good news.

Bishu Highway dates from 2009 when it was cranked out by Shin Kurushima Toyohashi. With a gross tonnage of 56,978 grt, 17,649 dwt, it has a capacity of 6,135 cars on 11 decks. The ship has called in Halifax many times, averaging about one call a year, although it was last here as recently as March 13.