'Twas a misty day in Halifax with conditions deteriorating as the day went on to rain and fog.
Fortunately most of the action I wanted to capture occurred before it got too bad. 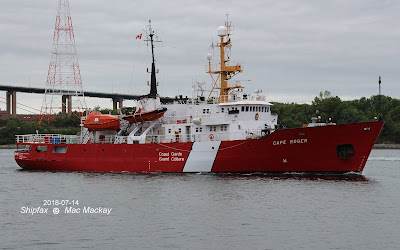 CCGS Cape Roger with its in water refit complete, sailed this afternoon for patrol. With the Coast Guard fleet spead thin these days due to emergency and scheduled repairs, ships are being repositioned, sometimes for from their home bases. An example is CCGS Samuel Risley, which has sailed for the Arctic from its base on the Great Lakes. This is the first arctic trip for the ships since it was built in 1985. In fact it has rarely left the Lakes. One notable exit was for refit in Shelburne, NS in 2004. It also did a replacement stint out of Halifax from July to September 2015.
Its near sistership CCGS Early Grey, normally based in Halifax has been assigned to Newfoundland to cover for the CCGS Ann Harvey which ran aground in 2015. While under repair the decision was made to make an early start on a life extension program.This necessitated cutting out much of the accommodation to remove the electric propulsion motors for rebuild. That refit was to have been completed last year, but has now been extended to September of this year.
Also CCGS Terry Fox is in drydock for repairs in Port Weller (St.Catharines, ON) and Des Groseilliers in Lévis, QC for life extension.

The most significant arrival of the day had to take back seat to other ships as far as photos are concerned since it arrived and will sail in the dark, and was shrouded in mist during most of its stay. CMA CGM Chennai was delivered to Seaspan International in May and entered a three year charter to CMA CGM (with a three extension option). It is another ship that makes Halifax a member of the 10,000 TEU plus club for large container ships. 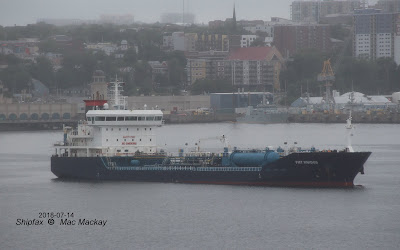 First named Atlantik Glory when it was built by Selah Makina, Tuzla, Turkey in 2010, the 8,391 grt, 13,214 dwt ship is specially fitted for IMO Type II hazardous cargoes (Type I is most severe and Type III the least severe of the three grades of hazardous chemicals). It took its present name in 2017 and operates in the Team Tankers pool. It has twelve tanks, lined with epoxy, which on this trip contain caustic soda (NaOH), from Freeport, TX for Port Alfred, QC..

Full width bridges often indicate a ship built for winter conditions, but in this case I can find no ice notation, so it is more likely a means of protecting the crew from exposure to dangerous cargoes.