A new tour boat has broken into the Halifax harbour cruises business with a novel approach. WinStar Cruise offers the usual harbour tours and charters, but also has a lobster dinner cruise, with staff speaking English and Mandarin. The large numbers of tourists (and residents) who speak Chinese has presumably sparked the plan by WinWin Atlantic Holdings Ltd, of Markham, ON, the owners of the boat to set up business here..
The other slight novelty of the operation is that it runs from Alderney Landing in Dartmouth, just steps away from the harbour ferry terminal and transit stops. 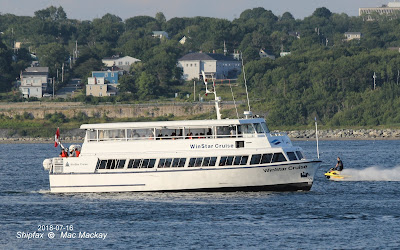 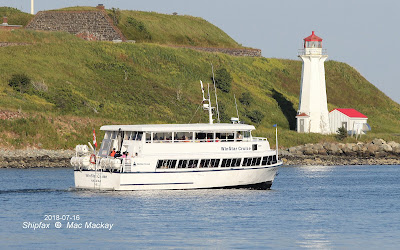 WinStar acquired the boat over the winter from Jacques Normand of Baie-St-Paul, QC, who had tried to establish tours from his own home port and from Pointe-au-Pic, QC over the past two summers, but for a variety of reasons was not able to make a go of the operation. Despite an investment of $200,000, not including purchase price, Normand cited Transport Canada regulations, lack of water depth at piers and  poor response to promotion possibilities as factors in causing him to sell off the boat. 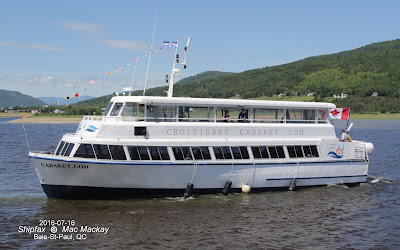 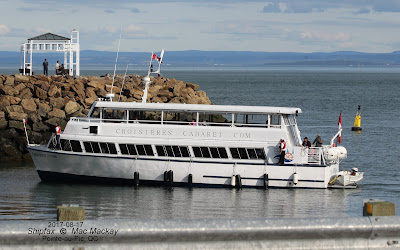 I suspect WinWin has better chances in Halifax.

The boat itself is an interesting one, built with aluminum in 1972 by Paasch Marine Services of Erie, PA as American Adonis II for International Boat Tours Inc of Clayton, NY. It then became Island Princess and was located in Florida when found by Jacques Normand. It was then named Cabaret.com (a name Normand decided to keep) and it was a 75 day trip from Stuart, FL to bring the ship to Baie St-Paul where it was refurbished for Canadian service.

WinStar was able to put it into service with very little modification, and will operate with a passenger capacity of 120.