HMCS Fredericton emerged from under its cocoon earlier this month, then moved from the Graving Dock to the Machine Shop Wharf at Halifax Shipyard last Wednesday. It had been in the shipyard since last fall, most of the time completely tarped in, to allow work to continue out of the weather. It is widely believed that the Shipyard will build a structure over the graving dock to allow for all weather work. 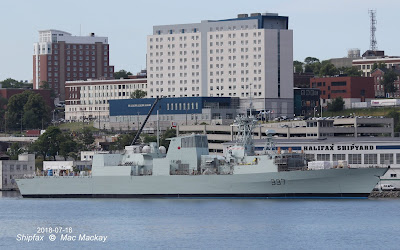 Cryptically referred to as undergoing a "Docking Work Period", it was in the Graving Dock for nine months. At a reported cost of $30 million, the DWP would seem to have included more than just the "routine maintenance and upgrades" phrase also used to describe the work. The Halifax class ship, commissioned in  September 1994, had its FELEX upgrade at the Shipyard from October 2011 to January 2013, then returned to HMC Dockyard for more work, returning to service late in 2014. It is the second ship to have a "DWP" - HMCS Halifax was first.

While gazing at Fredericton yesterday, HMCS Kingston sailed by on its way to Bedford Basin for the day. 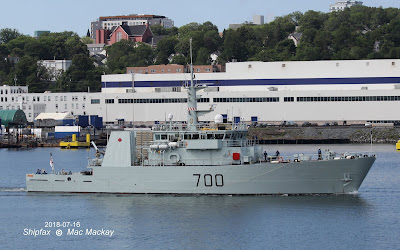 Lead ship of the Maritime Coastal Defence Vessels, Kingston was launched by Halifax Shipyard August 12, 1995. It was the first naval launch at the yard in thirty years, and marked the start of the a resurgence in activity at the yard, culminating in the present day position of the yard as the main driver of the Halifax industrial economy.

Originally built as minesweepers, the ships are now largely relegated to training and flag showing, but have participated in NATO and drug interdiction activities. Their future remains in doubt, as a mid-life refit program was cancelled. Instead it is expected that the 12 vessels will be retired as the five (or six?) Arctic Offshore Patrol Vessels now under construction at Halifax Shipyard enter service.