The current Peace Boat, Ocean Dream, made its inaugural call in Halifax today. Operated by a Japanese based NGO dedicated to peace, sustainability and numerous other humanitarian causes, Peace Boat operates cruises to provide educational experiences and other opportunities for its passengers. - mainly youth leaders.

Founded in 1983, it has operated cruises on five different ships, the current one since 2012. The first cruise was on The Topaz, the former Empress of Britain, in 2003. The current trip, which started in Stockholm, has called in Copenhagen, Bergen and Reykjavik, participating in special events in each port, with an emphasis on the health of the oceans.

During its visit to Halifax its voyagers will attend a forum on climate change and ocean degradation, hosted by the Mayor.


The ship was built in 1981 as Carnival Cruise Line's first new build, and was named Tropicale at the builders yard, Aalborg Werft in Aalborg, Denmark. It operated mostly in the Caribbean, from such ports as  Tampa and New Orleans. 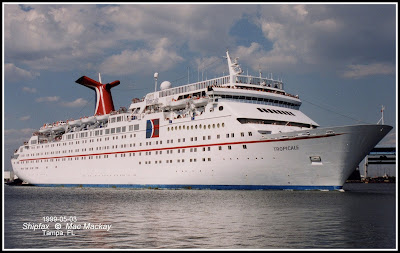 Carnival introduced the winged funnel on Tropicale and have used it on all subsequent ships in one form or another.

In 2001 Carnival transferred the ship to Costa where it was renamed Costa Tropicale and it underwent a  major refit. That operation saw the removal of its distinctive winged Carnival funnel and replacement with the signature Costa "stovepipe", which it still carries. 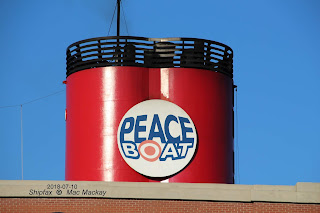 In 2005 Carnival Corp reassigned the ship to its P+O brand, renaming it Pacific Star It worked out of Australia until sold out of the Carnival family in 2008 to Pullmantour Cruises. In 2015 it was sold again to Ocean Dream Shipping Inc and bareboat chartered to Peace Boat. The ship's original tonnage was 22,919 grt, but this has crept up to as much as 36,674 grt according to some sources.

On leaving Halifax the ship will sail for New York where it will host a major UN sponsored sustainable development conference. It has a capacity of 1422 passengers and operates with a crew of 550.

Update
Getting underway on time this evening, and using the tug Atlantic Fir to get off the dock and turn (it used the same tug this morning) the ship obligingly sailed north and west of George's Island, and despite shadows from shoreside buildings, made a good sight. 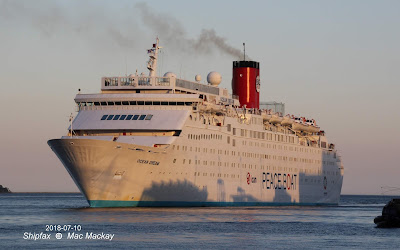 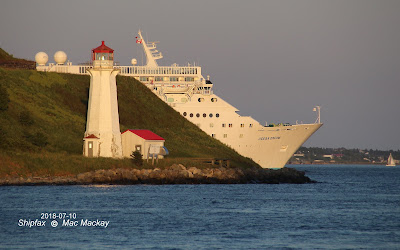