The tanker Algonorth arrived in Halifax January 3, and due to high winds, it anchored in the harbour. When things calmed down this morning it moved in and tied up at Imperial Oil's number 3 dock. 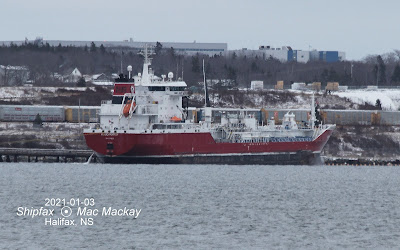 Oddly, the ship docked with its bow facing south - the first time I have seen this that I can recall. The only explanation I can give is that there may have been frozen spray on the starboard side manifold.

Algonorth is unusual several ways. Most obvious is the red hull paint, a carry over from its previous owners, Alvtank Rederi of Sweden. The ship was built in 2008 by Tuzla, Turkey, as Gan-Gesture  but was delivered as Ramira. Measuring 12,164 gt, 16,979 dwt, it is an ice class vessel, suitable for Great Lakes trading.

Algoma Tankers acquired the ship late in 2018, but have not repainted it in traditional Algoma colours of very deep blue hull and beige superstructure.  The white hull stripe is also a fashion statement that is not much indulged in by shipowners these days. It therefore stands out and has drawn a lot of favourable comment.

The other notable thing about the ship is that it was the last ship to exit the St.Lawrence Seaway system before it closed for the season on December 31, 2020. Algonorth loaded a cargo at Imperial's refinery in Nanticoke, ON for Halifax, and will presumably spend the winter working the St.Lawrence River and east coast.

For more on the ship see: http://shipfax.blogspot.com/2018/12/new-for-algoma.html