It took a telephoto lens and a wide angle lens to get pictures of two ships in Halifax today. 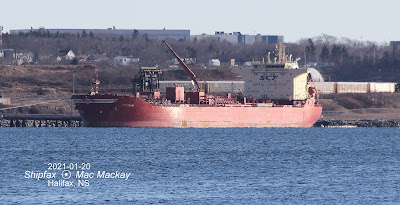 The ship is slightly unusual for a MidRange type tanker, in that it was not built by one of the well known Korean shipyards. Instead it came from Brodotrogir (the Trogir Shipyard in Trogir, Croatia) in 2006. The 27,357 gt, 47,197 dwt ship is owned and operated by SCF Novoship JSC of Russia. That company is one of the many tentacles of the joint-stock company [JSC] Sovcomflot [SCF], namely Novorossiysk Shipping Co [NSC]. The parent company owns 117 tankers, with more under construction and chartered. It also manages its fleet through various subsidiaries around the world - this ship from Dubai, UAE according to some sources.

I photographed the ship at the same berth but from a different angle July 23, 2015.

At that time there was still most of Imperial's refinery in the background. Glad the ship got some paint.

CSL Tarantau was the subject of the super wide angle (18 mm equivalent) at Pier 9C. 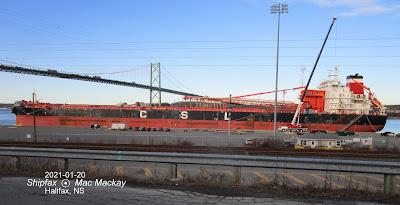 The ship arrived January 13 for maintenance [see previous post]  which is winding up today, with the ship scheduled to sail this evening. I don't have a destination yet, but will add it in later when AIS picks it up. (The ship took tug assistance out into Bedford Basin to turn around before setting course outbound.)
.