Three Arrivals, but all is not well

Despite grim statistics for seaborne trade on the North Atlantic routes there were three container ship arrivals today, one for Fairview Cove and two for PSA Halifax.

Fairview's was the well known Atlantic Sun, one of the five ConRo sisters operated by the Grimaldi Group's Atlantic Container Line on their weekly service to and from North Europe. 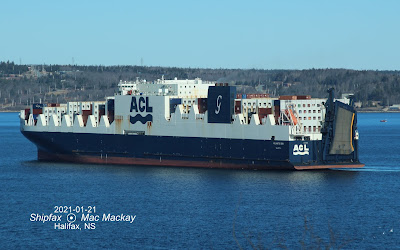 The current weakness of transatlantic trade is evident from the relatively few containers visible on the ship's deck. ACL however benefits from RoRo trade, and I have noted large numbers of cars arriving on these ships recently

Atlantic Sun arrived from Baltimore and will sail tonight for Liverpool on the eastbound leg of its run.

The two ships for PSA Halifax arrived at the same time, with Taipei Trader going first. 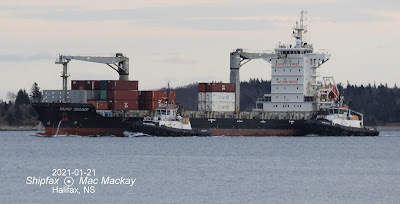 Tugs Atlantic Cedar (forward) and Atlantic Willow prepare to turn the Taipei Trader off PSA Halifax.
The ship and its sister Tampa Trader operate the weekly "Canada Florida Express" service for ZIM, which works as a feeder from Halifax to the US and ZIM's Kingston, Jamaica hub.  They are 1102 TEU (including 220 reefer) ships of 9932 gt, 13,063 dwt, built in 2014 by Jiangsu Newyangzi Shipbuilding in Jiangjiang, China, equipped with two 45 tonne cranes. Taipei Trader carried the name Cap Avatele from 2014 to 2016.
The third ship in was MSC Eleni on its second visit to Halifax. The first was on January 11 when it was westbound to Montreal. 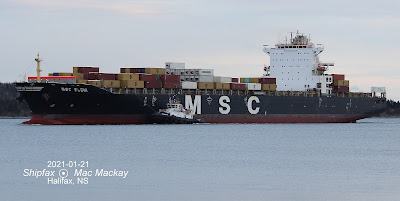 Atlantic Fir has taken the forward position while Atlantic Oak (not visible) has moved to the starboard quarter to assist in turning the ship.
The ship is on MSC's longstanding transatlantic service, which has just started to call in Halifax to top off or decant cargo to reduce draft for the St.Lawrence River. It is now eastbound again and will top up with available cargo from Halifax.
MSC Eleni dates from 2004 when it was built by Hanjin Heavy Industry and Construction Co Ltd in Busan. The 54,881 gt, 68,254 dwt ship has a capacity of 5060 TEU including 400 reefers.

Unlike the transpacific trade which has clogged ports such as Los Angeles/Long Beach, container volume on the Atlantic has dropped off the cliff. The dearth of cargo has caused THE Alliance partner HAPAG-Lloyd to  "blank", "void" or cancel sailings altogether. Now they have announced the cancellation of one service altogether. The AL1 route is the victim of the downturn. That left only the ATA service calling in Halifax, but HAPAG-Lloyd announced today that Halifax has been added to the AL5 service which is a North Europe to North America West Coast via Panama. As first port in and last port out this keeps Halifax in a good position. However reliability will still be a question if ships are delayed for days or weeks by west coast port congestion.