The Dutch paper and multi-purpose carrier Singelgracht arrived in tow late this afternoon January 23 and tied up at Pier 9C. One of the Spliethoff "S class", the 16,641 gt, 21,402 dwt ship has side loading doors and elevators for paper products and three cranes of 120, 90 and 55 tonne capacity to handle a wide range of cargoes. It has a container capacity of 1134. Built in 2000 by Mitsubishi, Shimonoseki, it is one of eleven similar ships in the fleet.

Harbour tugs flock to assist the tow once inside Maugher's Beach.

The tow was carried out by Secunda's tug/supplier SIEM Commander which had been laid up at the C.O.V.E. dock in Dartmouth. Built in 2009 by Havyard, Liervik, Norway, as STRIL Commander it was acquired by SIEM from Simon Mokster in 2017. The 16,000 bhp tug/supplier arrived in Halifax in July 2019 and saw some work supplying and towing for Sable gas, but has been idle for some time. 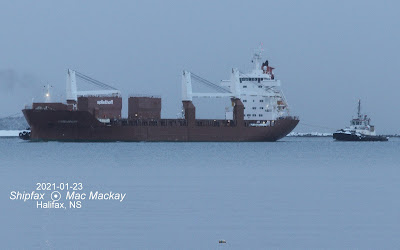 The ship was en route from Zeebrugge to Philadelphia when it apparently had some sort of problem. SIEM Commander sailed from Halifax at midnight last night, so the ship was not far off. The tow was joined at the pilot station by the harbour tug Atlantic Cedar to provide braking and steering power.

This incident again raises the topic of Emergency Towing Vessels (ETVs) for the Atlantic Coast. With the absence of any offshore oil or gas activity, there are very few "vessels of opportunity" available to respond to the occasional emergency. The fact that there was any vessel of SIEM Commander's capability available, and that it could be mobilized at short notice (with a skilled crew) is quite fortuitous. 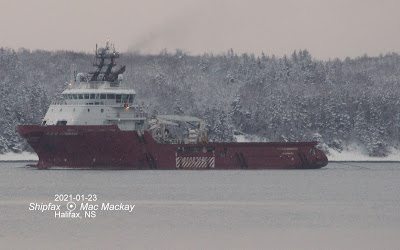