Pictor - catching up with Eimskip

With one of their ships out of service, the Icelandic shipping company Eimskip has responded by transferring ships and chartering in tonnage to meet schedules. On December 27 Lagsarfoss lost power and was towed back to Reykjavik, arriving December 30. Since then EF Ava has been transferred back to the Green Line (which serves Argentia, Halifax and Portland, Maine). This has allowed the line to catch up with the lost trip.

Today's arrival in Halifax is the regular caller Pictor, which began working for Eimskip on their Green Line in May 2019. At that time its name was Pictor J. That changed in August 2020 when it appears that the ship was sold by a one ship company manged by Jungerhans to Pictor Atlantic Feeder AG, managed by F+L Schiffahrts. 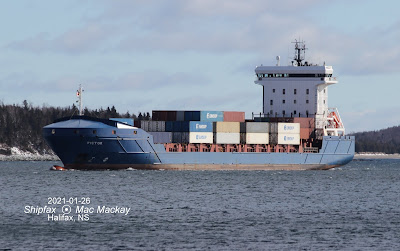 The ship was built in 2009 by the Naval Gijon shipyard in Spain, measuring 10,965 gt, 12,640 dwt. It is a gearless container ship with a capacity of 925 TEU including 200 reefers. That large reefer capacity is needed due to the large quantity of fish exported by Iceland.

The ship is due to sail this afternoon for Portland.