The cable ship IT Intrepid sailed this afternoon after a period of maintenance at the owner's headquarters at Pier 9B. IT International Telecom is based in Halifax, but services cables in many areas around the North Atlantic basin. 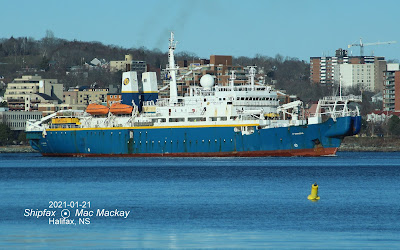 The ship has been based here for many years, and mentioned in this blog many times:
http://shipfax.blogspot.com/2013/04/it-intrepid-off-to-deep-panuke.html

As with all of the old time and traditional cable ships it has huge sheaves mounted over the bow, which are used to pay out or retrieve submarine cable. 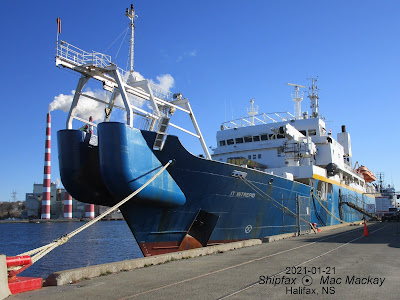 This morning before the ship departed some sailors were working in the bow, giving some idea of the scale of the sheaves.

(Water vapour exhaust from the Nova Scotia Power Corp's gas fired generating station at Tuft's Cove, in the background, is condensing in minus 0 degrees C air.)