CSL Tacoma arrived during the night at National Gypsum. The ship is a regular caller and would not normally rate much notice. However when fleet mate and sister ship CSL Tarantau arrived at Pier 9C for repairs it became a challenge to get a photo with both ships in the same frame. 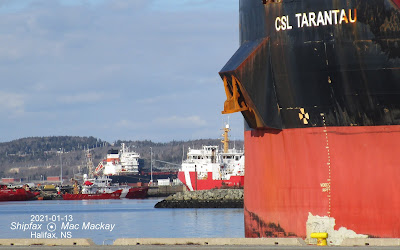 With portions of CCGS Jean Goodwill (left) and CCGS Captain Jacques Cartier at right, and CCGS G.Peddle S.C. at the BIO, CSL Tacoma is still visible at National Gypsum's dock in Wright's Cove.

CSL Tacoma was built by the Chengxi Shipyard in Jiangyin, China and is a member of CSL's ocean going Trillium class of self-unloaders. It measures 43,691 gt, 71,552 dwt.

CSL Tarantau, also a Trillium class ship, built by the same yard in 2013 with a tonnages of 43,691gt comes in at 71,279 dwt. did not start life as a CSL ship. It was built for CSL Americas pool partner Klaveness and named Balto.

In 2016 Klaveness withdrew from the pool and sold its ships to the other partners, CSL and Algoma. Although Balto's orange hull was repainted and labelled for CSL, the CSL Tarantau still has orange painted self-unloading gear, betraying its Klaveness ancestry.
CSL Tarantau's arrival at Pier 9C was not unexpected. A crane and a truck load of equipment and several smaller vehicles and workers were ready to greet the ship. Some of the equipment may include replacement belts for the self-unloading equipment. Belts are subject to considerable wear and tear and need replacement after conveying thousands of tons of material.
It seems that the CSL ships may have been involved in a "topping off" operation in the Strait of Canso over the last few days. The big bulker NSU Voyager 107,829 gt, 208,745 dwt with a cargo of coal from Norfolk, VA was anchored for several days and CSL Tacoma was recorded alongside. CSL Tarantau on the other hand likely delivered a load of coal to Sydney, NS before coming here.
.