Reminder of the Captain Jim tragedy

On January 29, 2019 the service boat Captain Jim sank off Eastern Passage. The boat's skipper and a cargo surveyor were able to escape to a raft, but the boat's deckhand was apparently trapped below and died. The two survivors were picked up by the pilot boat, and the deckhand's body was recovered by navy divers. The boat itself was raised and broken up.

The Captain Jim was returning from a cargo sampling trip to a tanker anchored off Halifax. At the tine there were two such tankers, Star I bound for Imperial Oil and Elka Hercules bound for Irving Oil.

In one of those strange coincidences, Elka Hercules is in Halifax again two years later, and berthed at Irving Oil's Woodside terminal. 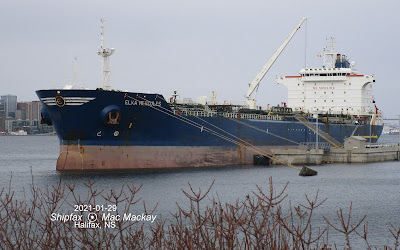 Elka Hercules was built in 2002 by Brodosplit in Split Croatia, measuring 27,539 gt and 44,481 dwt. It is operated by European Product Carriers. 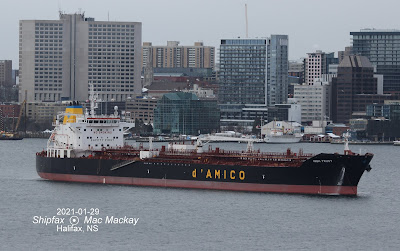 Also in Halifax, but anchored inside the harbour is  a tanker from Antwerp destined for Imperial Oil.  High Trust is operated by one of the d'Amico companies, part of the Societa d,Amico di Naigazione S.p.A., which also operates tankers and bulk carriers. It was built in 2016 by Hyundai Vinaship Shipyard Co in Ninh Hoa, Vietnam and measures 29,935 gt, 49,990 dwt.

The Transportation Safety Board of Canada is investigating the loss of the Captain Jim. Initially they stated the investigation would likely take 450 days or 15 months, but no official report has yet been published.

For my posts on the loss of the Captain Jim see: