Another clean up for the Coast Guard

During the period of high winds two weeks ago the derelict fishing trawler Hydra Mariner parted its mooring in the Wright's Cove area of Bedford Basin and fetched up on Navy Island. Today the Coast Guard's CGE310 could be seen alongside. That boat is used for pollution response. 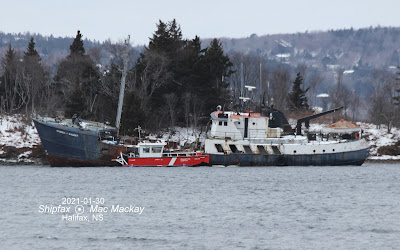 Built in 1963 by George T. Davie + Son s Ltd in Lauzon ,QC as Cape Mira for National Sea Products, it was a groundfish trawler and fished out of Louisbourg, NS. It was later converted to a scallop dragger, having had several owners.

In 2001 it was sold and was renamed Hydra Mariner for intended conversion to a "chase boat" to protect offshore seismic operations, but the work was never completed.  It passed through several owners, but remained laid up at the Dartmouth Marine Slips. On June 4, 2009 it moved under its own power to the Navy Island Cove area where it has remained ever since except for other unscheduled departures from the mooring. I know of at least two - one in 2011 and one on 2014 when it also drifted and ran aground. It may have been a "live aboard" for a time, but seems to have been largely abandoned recently.

The Canadian Coast Guard will step in and carry out a clean up and charge the owner for costs, but if no owner can be found to take responsibility for the vessel, the taxpayers will be on the hook for any clean up and likely demolition.