BBC Opal - in before the storm

With a major winter snow storm approaching ships have the option to come into port or to remain out at sea. The auto carrier NOCC Oceanic will be taking the latter course and riding out the predicted high winds and heavy snow, rather than tying up at Autoport. That facility relies on mooring buoys and has only a light jetty which could well be damaged by a high sided ship alongside during a storm. Also attempting to unload autos during a heavy snow fall may not be wise. 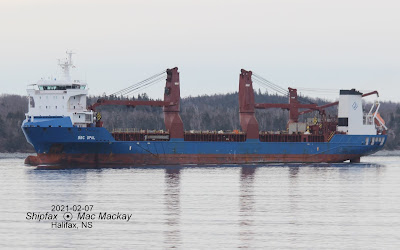 The heavy lift ship BBC Opal took the former option, entered port and tied up this afternoon. What appears to be a heavy object, such as a transformer, is awaiting the ship on a rail car at Pier 27. It is unlikely that it could be loaded before the snow starts later this afternoon, but perhaps blocking and other prep work in the ship's hold can proceed under cover.
BBC Opal was launched as Senda J. in 2011 by Sainty Shipbuilding (Jiangdu) Corp in China. It is a 12,810 gt, 14,359 dwt vessel with two 400 tonne and one 80 tonne capacity cranes. The two large cranes can work in tandem for an 800 tonne lift. The ship's holds are box shaped and "open hatch" (meaning that the hatch coamings do not overhang the sides of the holds).
The ship can also carry 958 TEU (nominal) or 683 at 14 tonnes, and has 28 reefer plugs on deck.
The ship was renamed Industrial Faith on delivery, but reverted to Senda J. later in 2011. It became Mirabella in 2015, Industrial Faith again in 2016 and finally assumed its current name, BBC Opal in 2019. [There was a Dutch heavy lifter named Mirabella - a different ship - which called in Halifax in 1986 for Jumbo Shipping, carrying locomotives to Indonesia. See October 27, 2016.]
The ship is one of more than a dozen ships of this design in the 150 ship BBC Chartering fleet operated by Briese Schiffahrts for a variety of owners. Interestingly the ship is also listed in the owner's Reederei Juengerhans fleet, managed by the specialist heavy lift brokers ARKON Shipping and Projects. Also oddly the ship is still carried on the Juengerhans fleet list as Senda J (with no period after the "J").