The four North Atlantic services to the US operated by Maersk and partners are rotating planned omissions of trips between January and the end of March. Due increasingly severe winter weather in recent years, reliability had become an issue. These shifts are intended to allow ships to  maintain schedules, by diverting cargoes to alternate services where available.

Maersk's CAE service does not seem to be effected by this change. It runs Bremerhaven, Rotterdam, Antwerp to Montreal westbound and via Halifax eastbound. Operating with three"P" class ships and the charter EM Kea, they usually call in Halifax on Saturdays. However this past weekend there was no call since EM Kea was still in Montreal. It has now departed directly for Bremerhaven. Schedules are vague about further calls over the next few weeks. Although Maersk Penang is still scheduled for February 27, there is no scheduled call next week by Maersk Patras. Fleet mate Maersk Palermo is due next on March 6. 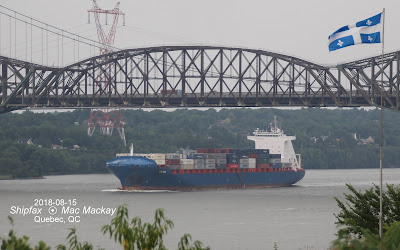 I grabbed this great Quebec City view of EM Kea before the neighbours chased me away from this million dollar view!

The handsome ship was built by Stocznia Szczecinska Nowa in Poland in 2007. Measuring 35,824 gt, 42,166 dwt, it has a capacity of 3108 TEU. It was built as Cap Norte, then renamed Cap Egmont in 2012 for charters to Hamburg-Sud. It was renamed EM Kea in 2015 and began to run on the Maersk service in the same year. Maersk publicizes a 3091 TEU capacity, while other sources report 3108 TEU.

Year round service on the North Atlantic can be grueling and despite this year being fairly light as far as ice is concerned, navigating the St.Lawrence in winter can also be dicey and delays can be expected. The only way for the CAE service to make up lost time is to delete the Halifax outbound call.