This winter has been hard on old trawlers, with two coming to grief in recent days.

In Halifax, commercial and Coast Guard crews are still at work removing contaminants from the Hydra Mariner (ex Cape Mira) which drifted ashore on Navy Island after parting its mooring line in a storm January 14. See January 30, 2021 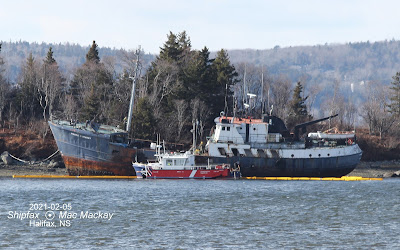 Now secured with a line ashore (!) Hydra Mariner is boomed off at Navy Island with CGE 310 alongside.

The latest casualty - and a far more serious one - is also a product of the same  George T. Davie + Sons shipyard in Lauzon, QC. The Primo also dates from 1963 when it was built for St.Lawrence Sea Products as a side trawler. 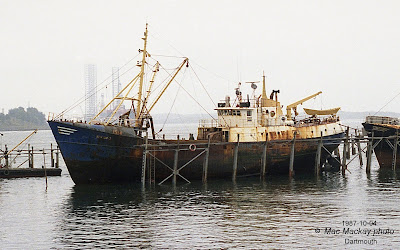 Primo preparing to haul out at Dartmouth Marine Slips.

The vessel was delivered in March 1964 and made its own way through 740 miles of severe ice en route to Lunenburg, without icebreaker assistance. In December of the same year it had a fire on board while 23 miles off Halifax. Crews from HMCS Terra Nova and HMCS Gatineau put out the fire, but five crew were injured suffering from exposure and one was missing and presumed lost.

In 1982 it tipped over on the slip at Sydney Engineering and Drydock, but was righted with only minor damage. 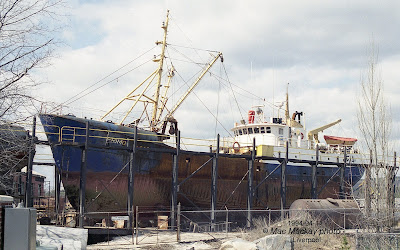 Safely on the slip at STENPRO in Liveprool, Primo shows off its fine hull lines.

After several changes of ownership it was converted for scallop dragging and fished out of Riverport, NS until 2005 when it retired from fishing. New owners planned to convert the boat to a cargo ship to work under sail, but this work seems to have stalled and it has remain neglected in Lunenburg for many years. 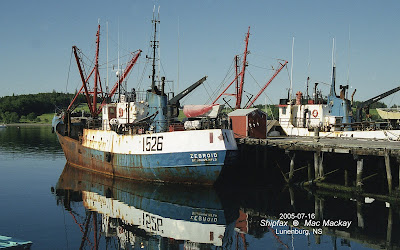 Zebroid (at left) was converted to sail, but Primo (at right) languished at the pier.

Under the weight of a heavy deck load of snow from the storm of February 7 the boat gradually sank alongside its berth.

Prospects for anything beyond scrapping seem unlikely for the veteran vessel.