News - not all good, not all bad

Perhaps the bad news was not a total surprise, but it is still sad to learn that there will be no cruise season in Halifax in 2021. The Port of Halifax made the announcement today. With COVID-19 still not under control the federal government has apparently made the call through the Minister of Transport. Some cruise lines are still operating elsewhere in the world in a limited way, but most have extended last year's shut down as ships continue to be idled and even scrapped. 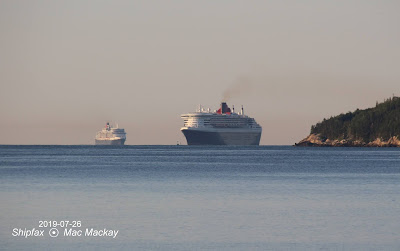 Most of the modern ships are being kept in "warm layup" but without income, one has to wonder how long the industry can retain the ships it has, let alone continue to build new ones. It will be many years before pre-COVID levels of travel resume, by which time some of the better known ships may be too old to return to work. Queen Mary 2 seen above was built in 2003, for example.

The good news was not delivered by the Port of Halifax, but was well covered in the trade press, and that is MSC's confirmation that its temporary calls in Halifax have become "permanent". Starting in August 2020 the world's second largest line, Mediterranean Shipping Company, diverted ships from Montreal due to labour issues in that port. Once those were resolved the line continued to call, having found local business to support. They could also reduce ship's drafts here to meet seasonal restrictions on the St.Lawrence.

MSC's Canada Express 2 service, which runs from Valencia to Montreal and Barcelona will likely call on both the east and westbound legs of their trips. Montreal will remain the terminal port, but there will still be significant traffic for Halifax - reportedly 700 moves per call. Access to MSC's two Mediterranean hubs is a major attraction to local shippers also.

With congestion at west coast US ports reaching crisis levels, cargo diversions via Suez can be expected. These Mediterranean hub ports could be instrumental in easing the demand. At last report more than 40 ships were awaiting a week or more for berths in LA/Long Beach and Oakland was backing up too. Seattle/Tacoma was next in line but will be hard pressed to make a dent in the log jam. 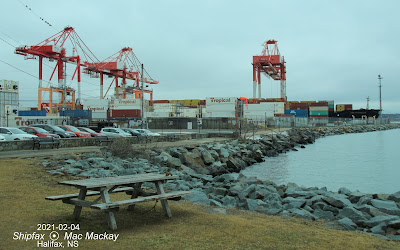