Today's container ship arrivals included a ship that is about the largest that Cerescorp's Fairview Cove terminal can handle, and a feeder ship for PSA Halifax, that is considered small by current standards.

Dalian Express at 88,493 gt and 100,006 dwt measures 320.4m long and 42.9m breadth, with a container capacity of 7506 TEU including 700 reefers. Built in 2001 by Hyundai, Ulsan, it was called Hamburg Express until 2011 when the name was appropriated for an even larger ship, a 13,196 TEU vessel. Dalian Express and sister ship Yantian Express (famous for its January 2019 fire) are currently the largest ships to call at Fairview Cove. 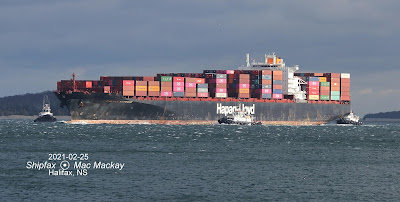 Cerescorp could conceivably handle larger ships if they could fit under the two bridges across Halifax harbour, but so far that has not happened. THE Alliance continues to serve Halifax, on its EC5 service, both eastbound and westbound, but it seems we have the most restrictive air draft of the other east coast ports on the route. (New York, Savannah, Jacksonville and Norfolk.)

At the other end of the harbour PSA Halifax greeted the first time caller Fouma on what is now ZIM's Canada Feeder Express (CFX) replacing the Tampa Trader. See this post for more on that ship. 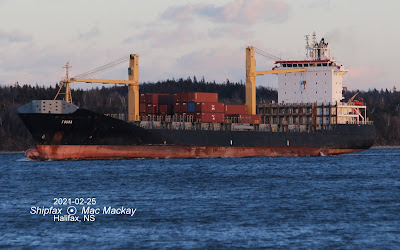 Fouma was built in 2007 by Zhejiang Ouhua Shipbuilding Co Ltd in Zhoushan, and at 15,375 gt, 19,288 dwt has a capacity of 1296 TEU (reefer capacity not published) and carries a pair of 45 tonne cranes. It was delivered as Maersk Recife and carried that name until 2010. The ship's capacity rivals that of some of the first generation container ships that were considered giants in their day, and its gross tonnage exceeds the last generation of general cargo ships of the 1960s and 1970s.