On one hand the arrival of ZIM Tarragona today was routine as the ship is a regular caller for ZIM, however another ship operating for ZIM did not sail on time and so ZIM Tarragona was forced to "loiter" (the naval term) in number one anchorage until the feeder Tampa Trader had vacated Pier 41 at PSA Halifax.

ZIM Tarragona used the western channel, which has recently been marked with additional navigation buoys as the preferred channel for larger ships. Thus the outbound tanker Torm Helvig, as the lighter draft vessel, used the eastern channel as it departed for Amsterdam.

Pier 42 was occupied by MSC Eleni on its first regular call for MSC. Ships of that line will be stopping in Halifax to drop off containers thus reducing draft while inbound from Europe (in this case Sines, Portugal)  before sailing on to Montreal. The ship was here in 2019 for the same reason, but as a "one of". 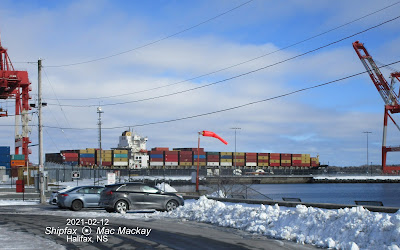