The broken down ship Imedghassen has been occupying the space at Pier 34 since its arrival here on January 9. That berth is seldom used for cargo work these days, and is usually reserved for ships under repair, and the CSL bulker Baie St.Paul is due here tomorrow, and has been assigned to the pier.

Therefore Imedghassen moved this afternoon, with assistance of the tug Atlantic Willow, to Pier 9C. The ship's name does not appear on future schedules for Melfi Lines, so apparently it will not be going to work for the Cuba run. With container carrying ships in short supply and shipping rates at an all time high, the owners must be eager to get the ship back to work. For whatever reason however, the ship is still stuck in Halifax. 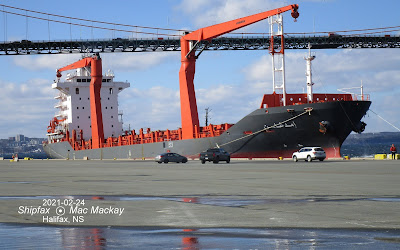 Longshore workers attend to the mooring lines at Pier 9C .

The Arabic script on the ship's bow reminds me that Algerian ships in particular are rare callers here. The last one I can recall is the cargo ship Biban which spent the Christmas to New Year period in Halifax in 1979-1980.

To summarize, the ship Biban, built in 1977 by Marine Industries Ltd in Sorel, QC*,  and owned buy the Algerian state shipping company, had a main engine breakdown in Duluth, Minnesota in June 1979. It was towed down through the Great Lakes to Montreal in July, where it languished until December when the legendary French tug Abeille 30 came to fetch it. The tow line parted in the Gulf of St.Lawrence, causing some damage to the ship, which resulted in tug and tow coming to Halifax where the ship was drydocked for hull repair. 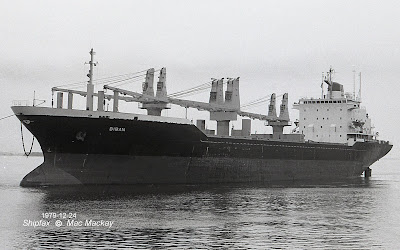 Biban in  Halifax - another distressed Algerian.

With the ship out of drydock December 31, 1979 the tug lost no time in rigging the tow again, and they sailed January 1, 1980. The ship's engine was repaired in Europe and it returned to service until early 2003 when it was broken up in India.

The Abeille 30 has the Biban in tow again, heading for Europe on New Year's Day 1980.

To my recollection Biban was the first, last and until recently the only Algerian ship to call in Halifax.

*The now vanished Marine Industries Ltd (MIL) shipyard in Sorel-Tracy, QC was a major Canadian shipbuilder, with upwards of 400 ships to its credit, including numerous naval craft. In the mid 1970s they built a series of cargo ships for Polish, French and Greek owners, plus two for Algeria: Biban and sister Babor.