MSC - makes up for

It was very quiet at PSA Halifax until late in the day - unusual for a Saturday. The Maersk / CMA CGM North Atlantic service ship Maersk Patras, which would normally have called outbound from Montreal skipped Halifax this week and headed directly for Bremerhaven. Maersk Line previously announced several service changes, bypassing certain ports citing extreme winter weather conditions. (This is the third week in a row with no call in Halifax.)

The CMA CGM Columbus Loop service would also normally have had a ship in port today too, but there was nothing nearby, so perhaps the voyage was blanked. This has also happened with several lines this winter, for a variety of factors including Chinese New Year, lack of available containers in Asia and congestion at several US ports.

The one ship that did arrive at PSA Halifax was MSC Donata en route from Liverpool, UK to Montreal, here to lighter off some cargo to meet St.Lawrence River draft restrictions. 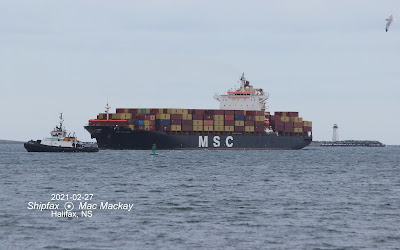 From the appearance of the ship it looks to be loaded to capacity in terms of the number of containers, and is showing a draft of  11.7m. Allowable draft in the Port of Montreal is 10.8m for container ships, but may be somewhat less between Montreal and Quebec City seasonally. Therefore the ship will be offloading a good many boxes to take a meter or so off the draft.
MSC Donata dates from 2002 when it was built by Hyundai Samho Heavy Industries Co Ltd, Yeongam, South Korea. It is a 40,108 gt vessel of 52,806 dwt with a capacity of 4132 TEU and is fitted with 500 reefer plugs.
MSC has scheduled the ship to call in Halifax again next week when it is outbound from Montreal, this time to max out its capacity.
.