The Canadian Coast Guard lifeboat Cadboro Bay took to the air briefly today. A crane lifted the boat aboard the re-purposed offshore supplier Atlantic Condor as the first step in its transfer to the west coast. 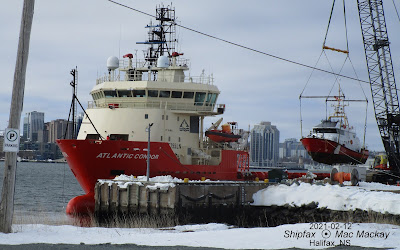 After a dry run yesterday, the boat returned to the BIO base, then came back alongside this morning at the IEL dock in Dartmouth where the operation began in earnest. 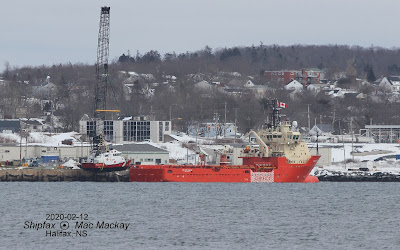 Cadboro Bay was built by Chantier Forillon in Gaspé and arrived in Halifax for the first time October 12, 2020. It has seen some service as a stand-in for the Sambro lifeboat while it was off for refit. 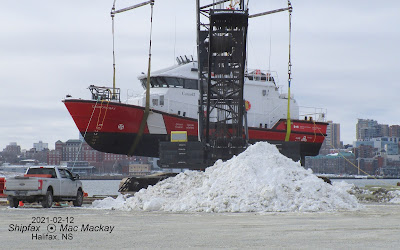 Sister boat Florencia Bay, which arrived from its builder, Hike Metal Products in Wheatley, ON on October  13, 2020 is also at the Bedford Institute, and will also be loaded aboard for the westbound trip.

The Atlantic Condor was been a familiar sight in Halifax, following its construction by Halifax Shipyard in 2011. It worked a ten year contract supporting Encana's offshore gas activity. When the gas was depleted and the installation decommissioned last year the vessel was laid up Stephenville, NL.

Atlantic Towing Ltd contracted to transport the two Bay class lifeboats to Victoria, BC before the end of March. The Atlantic Condor just returned to Halifax October February 8 after drydocking in St. John's. It has been fitted with special cradles (not visible) to support the boats for their voyage.