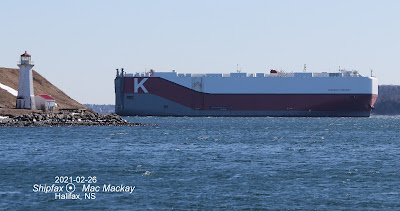 The ship is the last of a series of thirteen PostPanamax carriers to be built for K-Line by Tadostsu Shipyard Co, Yokohama. Delivered in 2019, it has a gt of 75,528 and dwt of 21,052, giving a capacity of 7500 cars. Although very efficient ships, they will be outclassed by K-Line's newest series of dual fuel diesel / LNG vessels now under construction.

With somewhere in the range of 80 car carriers in its fleet, the company is feeling the effects of the current economy, and laying up or scrapping vessels to suit conditions. Their total fleet  exceeds 475 ships according to most sources, and they are cutting back in other sectors, including dry bulk. On the other hand they are partners in Ocean Network Express [ONE] with a 31% share along with MOL, also 31%, and NYK, 38%. Container lines are doing very well these days due to a surge in demand for domestic products.

K-Line car carriers are given "Highway" names for which there is likely no limit to potential choices, although some may seem somewhat strange, since there are no actual highways with those names.