Holiday Island takes a Holiday from the Island. 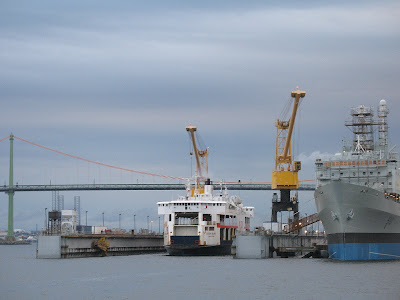 The ferry Holiday Island pulled into the Novadock floating drydock at Halifax Shipyard this morning for a refit. The ferry plies the route between Caribou, Nova Scotia and Wood Islands, Prince Edward Island seasonally. With the end of the tourist season, the other ferry, Confederation, can handle the traffic until the end of the year.
Holiday Island and sister Vacationland were built by Port Weller Dry Dock in 1971 to serve the Cape Tormentine, New Brunswick to Borden, Prince Edward Island route, in summer only. They were built with open car decks, and supplemented the closed deck icebreaking ferries to deal the annual tourism surge. When the Confederation Bridge opened, Holiday Island, still under ownership of the Minister of Transport, was transferred to her current route, and is operated by Northumberland Ferries Ltd. Sister Vacationland was renamed Fundy Paradise for use on the Grand Manan to Blacks Harbour, New Brunswick service, but the ship was unsuitable and laid up in Point Edward (Sydney harbour) Nova Scotia. In 2009 she was sold to Quebec interests and has been laid up in Trois-Rivières and now in Quebec City. There is talk that she will be converted to a dredging plant.
Holiday Island is getting on in years, and a replacement should be in the planning stages, but there is still concern over whether operating subsidies will be continued for the Caribou/ Wood Islands route. It is a popular tourist route and sees considerable truck traffic as well, and one ferry is insufficient to maintain a convenient schedule in the summer.
Novadock was vacated on Friday by HMCS Preserver, which is now tied up alongside.
.
Posted by Mac at 9:11 AM