AFL New England - paper does some homework-but more to do 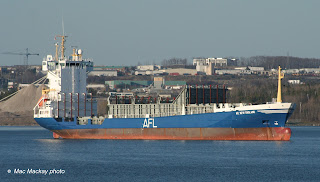 Following my mini rant the other day, a local newspaper did some more homework and spoke to both the International Transport Workers Federation inspector and the Mission to Seafarers (as I suggested) and confirmed that the crew had been paid.
Nevertheless the paper insists on using the word stranded. Well you can't win 'em all.
However there is more homework that I might suggest. I hear that there are maritime liens against the ship placed by a crown agency and a pier operator. This means that the ship is effectively detained in Halifax until the liens are lifted. They could be lifted by paying outstanding bills or posting a bond to cover eventual settlement.
This sounds to me as if the operators (but not the ship's owners) have not been paying their bills, and the only recourse by debtors is to lien the ship. So the question remains, what is the status of American Feeder Lines? Are they in creditor protection, bankrupt or what? Do they owe money to others as well. If so, that would useful information in the Business section of a newspaper.
This could turn nasty for all if the operators turn out to have shallow pockets and no assets. The ship might get caught in the middle.
Posted by Mac at 11:22 PM