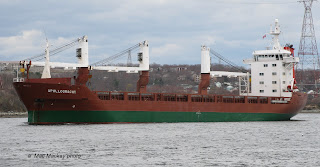 The Dutch cargo ship Apollogracht paid a quick visit to Fairview Cove today, and it was not to load containers. Instead it loaded a large spindle on deck. Although not unheard of, heavy lifts are fairly rare at Fairview, but it is the choice of the shipper and line as to where they will load the cargo.
Apollogracht is part of the large Spleithoff fleet of Amstrerdam. All its ships are named for canals in the city. They specialize in forest products, heavy lifts and odd cargoes, and are today's version of the tramp steamer.
The ship arrived in Halifax after a long trip up into the Great Lakes. It was in Montreal April 1, unloaded cargo in Windsor, ON April 5-7, and in Chicago April 11-18. It was downbound again and stopped in Montreal April 24 for a few days and in Gros Cacouna, QC April 28. Its next port is Saint John, NB
The ship was built in 1991 and is 7,949 gross tons, 12,150 deadweight and carries three 40 tonne cranes.

2. Outbound with its newly loaded cargo on deck 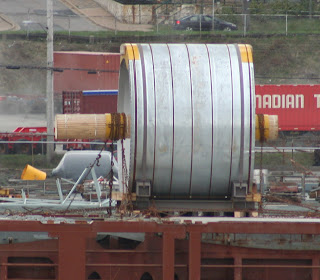