Extension work at pier 9c entered a new pase today. Harbour Development Ltd completed dredging yesterday (April 30) and moved its equipment back to pier 7. The tug Atlantic Tamarack moved the dredge Cranemaster and the mud scows HD6, HD 7 and HD 8 to pier 7 to tie up with the rest of the Harbour Development fleet (dredges D-6, Channelmaster, tug Swellmaster and work boat Atlantic Chestnut.) 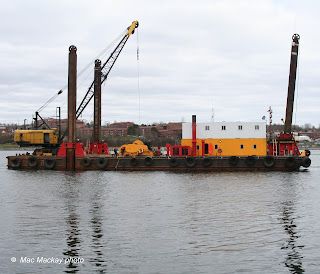 1. Cranemaster in tow back to pier 7. 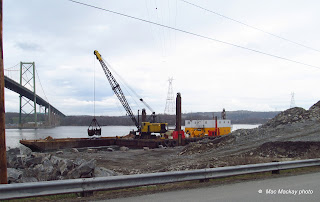 2. The last dredging was done quite close to the A. Murray MacKay bridge, under the power lines, and over a submerged cable - tricky work.

Meanwhile McNally Construction Inc moved on site with shore based cranes, and this morning (May 1) the tug Mister Joe arrived from Port Hawksbury with the tug Whitby and Derrick No.3. The latter craft is new to Halifax, but is certainly a veteran unit. Built back in 1941 in Kingston, ON by Canadian Dredge & Dock to its own account, the scow has spent most of its life in fresh water. It is fitted with spuds and a vintage Bucyrus Erie crane. The crane iss fited for pile driving, and that is where McNally's contract will start. 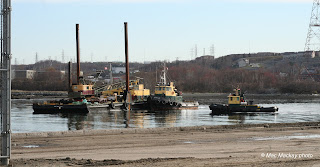 3. Mister Joe has Derrick No.3 on the hip as the tug Whitby detaches from the tow and brings the bargemaster out .
See also Tugfax for more on the tugs.
Posted by Mac at 7:28 PM