Ambassador takes another load of gypsum

Things must be picking up a bit at National Gypsum with two ships in a week. Ambassador arrived late Sunday night and sailed this morning for Burlington, NJ. The ship was built in 1983 at Port Weller Dry Dock as Canadian Ambassador and the full name still appears on the ship's hull in welded letters.
It has not carried that name since 1986 however, because in that year it was flagged out to Vanuatu when it left the Upper Lakes Shipping domestic fleet for Marbulk.
Aside from a brief interlude from April to December 2000 when it was renamed Algosea and reflagged Canadian, it has been foreign flagged ever since. 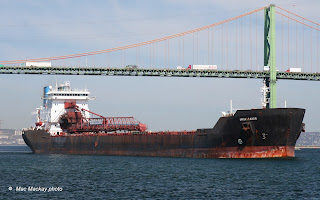 1. Ambassador has passed under the A. Murray MacKay bridge and is southbound in the Narrows off pier 9B, bound for sea. 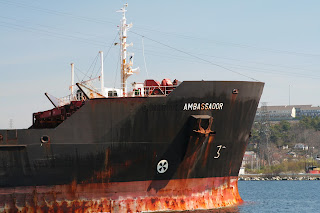 2. The ship's previous name still appears on the hull, but there is little likelihood that it will ever be used again.

Upper Lakes Shipping sold its share of Marbulk in 2000 and has now exited shipping altogether, selling out to Algoma. Its ships which had the prefix "Canadian" have now been renamed. Algoma has been a co-owner of Marbulk since 1997 but are not likely to bring this older ship back to Canada, so the "Canadian" prefix is history. The ship operates within the CSL self-unloader pool.

Ambassador has appeared on this blog before - see previous posts for more info.
Posted by Mac at 11:22 PM