The arrival on Saturday of the autocarrier Höegh Singapore was reminder that Lines were once regular callers in Halifax with general cargo and containers. 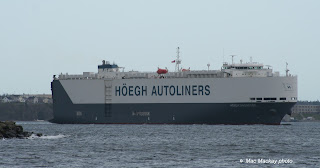 Höegh Singapore (47,266 gross tons) was built in 2011 by Xiamen Shipbuilding Industry Co Ltd in China and is rated for 4300 autos.

The Leif Höegh & Co A.S. was founded in Norway in 1928 as tanker operators, getting into general cargo in the 1930s and later ore carriers, reefers, forest products ships and in recent years autoliners and LNG carriers. The company started calling in Halifax in the early 1950s as tramps and established itself later as a shipping line. Halifax became a stop on its far east/ Canada /US route. 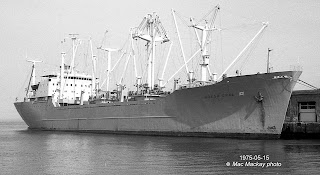 2. Höegh Opal  built in 1967 in Turku Finland had engines aft, but was a conventional  general cargo ships. It was lengthened in 1975 and carried 1x80, 1x50, 2x30 and 16x10 tonne derricks. It was broken up in China in 1992.
When faced with the container revolution they converted adapted cargo ships and operated some pure container carriers, but opted to try multi-purpose vessels carry containers and general cargoes, such as paper and baled rubber, long timber, bulk grain, cars or whatever was offering in addition to containers. Their C class ships carried containers but had a full suite of cargo handling cranes and derricks for general cargo. 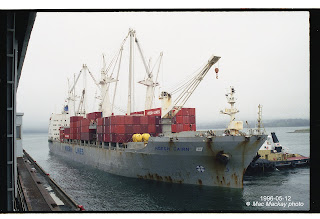 In the early 1980s Höegh built the D class ships, which were to be the largest multi-purpose ships in the world. 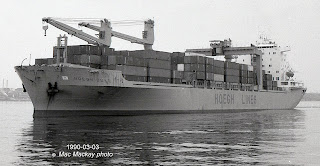 4. The impressive D class ships were the largest multi-purpose ships in the world and were regular callers in Halifax.

A company noted for its ability to reconfigure itself to suit market demands, eventually it realized that there was a limited future in the multi-purpose market and a huge investment would be needed in new ships. In September 1998 they signed a letter of intent with Oldendorff Carriers of Germany to buy the D class ships, charter them back to Höegh for two years and to operate the line as Höegh Oldendorff Indotrans. At the end 2000 Oldendorff bought out Höegh’s interest and the line became simply Oldendorff Indotrans effective December 31, 2000.

Oldendorff Carriers operated the four D class ships for only four years until selling Indotrans to Hong Kong based John Swire & Sons (one of the oldest British founded trading houses in Hong Kong) to be operated by their China Navigation Co Ltd. The ships by this time were becoming rather ripe and the old liner routes were cut back reconfigured and the Indotrans name disappeared, with the ships renamed to suit Swire’s normal system with Pacific prefixes.

Finally Swire Pacific (as it was known in the west) halted the Leif Höegh-founded route entirely and transferred the ships to the Pacific. There at least three of the ships were fitted with deckhouses on the after deck to carry cars. Only the former Duke seems to have escaped this indignity. The ships never called in Halifax with this configuration.

Earlier this year the ship were all renamed for the trip to the scrap yards in China.

Characteristics of the D class ships: 30,150 gross tons, 41,600 deadweight, capacity of 1656 TEU (but they rarely carried this many) and fitted with 3x36 tonne cranes, 1x25 tonne crane and one traveling gantry with 41 tonne capacity. Built with seven holds, four holds were strengthened for heavy cargoes (these were also open hatch holds, with the hatch ciovers thew same width as the holds) and three holds fitted to carry containers (924 TEU) and 732 on deck, with 50 reefer plugs.

1. The ship arrives in Halifax with a crew boat and yacht mixed in with containers on deck. 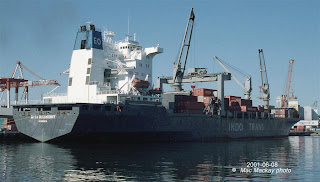 2. In Egon Oldendorff colours, the ship has no containers on its after deck. It had no gear of its own to handle boxes in that location, so relied on shore cranes.

3. In Swire colours, the ship leaves with no containers on the open hatch section.

1. Sailing from Halifax with a substantial deck load of containers.

2. Oldendorff opted to paint the derricks and gantry in a tan/buff colour.

Höegh Duke was launched at Wallsend September 6, 1983 and was completed in June 1984. It became Edward Oldendorff in 2001 and Indotrans Makkassar in 2004. It was renamed Pacific Makassar in 2006, arriving Halifax with that name October 25. It was renamed Hangchow late in 2011.

1. In addition to containers the deck load included some odd metal fabrications. 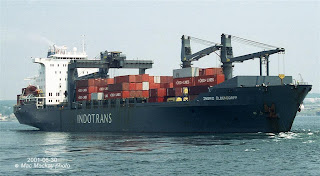 2. The Oldendorff hull colour was an attractive charcoal. 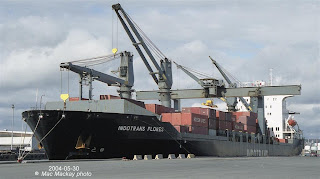 3. With the gantry arms swung out over side, the traveller has been fitted with a spreader to handle containers. It could also carry devices for loading paper rolls and  other special cargoes.

1. The after deck was usually reserved for empty containers. 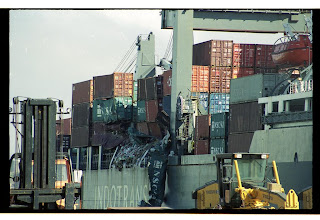 2. When Hurricane Juan struck Halifax September 28-29, 2003 the ship parted its lines at pier 30-31 and impacted the Saudi Tabuk at pier 27-28, damaging both ships and their cargoes. Ironically Albert Oldendorff was carrying many Saudi containers.

Höegh Dyke was launched February 8, 1984 and entered service in September. It was renamed Albert Oldendorff in 2001, Indotrans Celebes in 2004 and Pacific Celebes in 2006, finally becoming Hoihow in 2012.
As Pacific Celebes it was the last ship of the line to call in Halifax on February 21, 2007. The sips continued to call in Saint John for a time until moving to the Pacific coast only.
The Höegh company has now evolved into one of the largest car carrier operators, with 45 owned ships and 15 on time charter. They are also important players in the LNG tanker field. Their excellent website lists all the ships owned between 1928 and 2008, totalling 291 vessels, with photos of most.
.
Posted by Mac at 12:46 PM