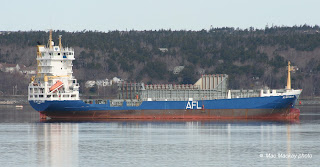 Crew members over the side and over the bow painting AFL New England this morning- hardly the sign of a "stranded" ship or crew.

An overly dramatic headline in a local newspaper today (which was picked up and broadcast around the world) claims that the AFL New England and its crew are stranded in Bedford Basin. Not only was the headline misleading but it is inaccurate.
Despite quotes from the owners of American Feeder Lines and the Port Authority the paper persisted in stating that the ship is stranded, with no evidence to prove that it is.
Stranded by the way, means either one of two things in maritime circles.
1. The ship is aground and cannot free itself.
2. The ship and its crew have been abandoned, unpaid, by the ship's owners or operators.
Since the ship is clearly afloat, the writer must have meant the latter, but he gives no evidence.
The idled ship and its crew have not been abandoned by its owners. If they had been, it would be unlikely that the crew would be out on bos'ns chairs painting ship as they were today (see picture above.)
The writer also gave no evidence of any research into AFL's business except an interview with AFL. Due diligence would have been to discover if AFL was in creditor protection, or bankrupt or in voluntary liquidation. There was also no statement from the ship's owners. Have they been bankrupted by AFL's closure? Have they been paying the crew? A quick call to the local inspector of the International Transport Worker's Federation or the Mission to Seafarers would answer this basic question.
Certainly since AFL has ceased trading the question of the ship's charter and who is paying would be an issue. Most charters run for a term and until it is resolved that the charterer is in default, the ship owner would be most unwise to bail out and remove the ship.
Also, until a new charter is arranged, what is the ship supposed to do? It has nowhere to go, so it might as well stay where it is. That hardly means it is stranded.
And finally the article does mention in passing that there is still cargo aboard the ship. If that is so, then the cargo will have to be unloaded or delivered at someone's expense. I hardly expect the ship owner to cough up that cost without some arrangement for compensation. In fact the ship owner may have the upper hand here, since he has possession of the cargo. In which case it is best for the ship to remain exactly where it is.
If the charter has been breached then the shipowner has a large claim against AFL which may well take time to resolve.
So in conclusion it was a particularly sloppy bit of journalism, regrettably all too frequent  in the local press over the years. A lack of knowledge on shipping matters and lazy research (two phone calls) is a pretty low standard for a paper in a major port.