Blue Puttees in the drydock 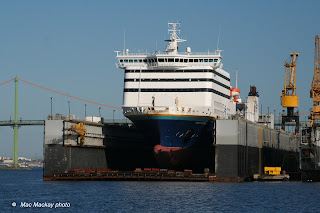 The second of the new Marine Atlantic Inc ferries arrived this morning and entered the Novadock at Halifax Shipyard. Built in 2006 as Stena Trader, it was the first of the Seabridger class vessels acquired by MAI. It was shortened and had additional passenger capacity added to suit it for the North Sydney-Port aux Basques route.
It entered service in March 2011, as Blue Puttees a few months before sister ship Highlanders which completed its drydocking on Monday.
Once the Blue Puttees comes out of drydock in a few weeks, it will return to service allowing fleet mate Atlantic Vision to start the North Sydney to Argentia seasonal service.
Posted by Mac at 11:35 PM