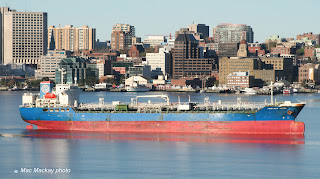 1. Fairchem Steed rest at anchor on a quiet Sunday morning, with the Halifax skyline in the background.
The chemical and products tanker Fairchem Steed anchored over night to await a berth at Imperial Oil. The ship is fitted with twenty stainless steel tanks of various sizes to carry all sorts of liquids including petroleum, edible oils, and on and on. Usually these ships (as with the previously posted Glory) are always carrying several chemicals and pick up and drop off at various ports. However this ship is in ballast. It discharged cargo in Hamilton ON on May 6-7 , returning down the Seaway via Montreal May 9.
Part of the Fairfield Chemical Carriers fleet the ship is registered in Panama and operated by Anglo-Eastern Ship Management. It was built in Usuki, Japan in 2005 and measures 11,642 gross tons and 20,0762 deadweight at summer draft.
The ship is managed by Anglo-Eastern Ship Management's Singapore office.
Fairfield operates more than 30 tankers from operating offices in Wilton CT, Antwerp and Singapore.