It wasn't the text book launch, with a ship barreling down the launch ways and splashing into the water. No, it was more like a slo-mo version, with the vessel taking the better part of an hour to reach the water, with many stops and starts along the way. The launch ceremony forCCGS Private Robertson V.C. took place at about noon-time. 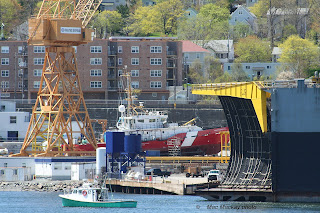 1. 12:17 the launch starts and the boat begins it slow descent down the launchway. (As seen from the Dartmouth shore.) Dominion Pursuit stands by. 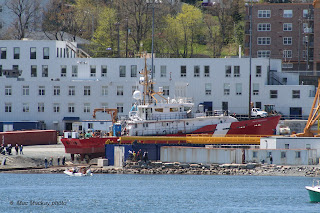 2. 12:31 the boat makes it almost to the end of the launch way. A Connnors Diving inflatible sits off to one side. Its crew had previously checked the submerged launch rails to ensure they were clear. 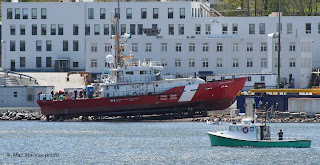 3. 13:04 with just the tips of the rudder in the water, a shipyard crew has now boarded the boat from the landside. 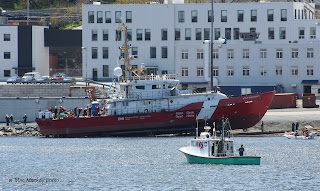 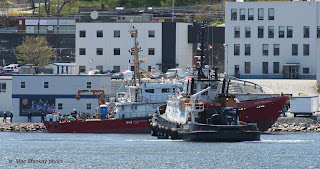 5. 13:07  finally clear of the land, the deck crew can release the cradle so that the boat will float off. Atlantic Oak stands in to assist.

6. Safely in control of Atlantic Willow and Atlantic Oak with CCGC Sambro standing by the flotilla moves off toward pier 9B. (As seen from the Halifax shore) 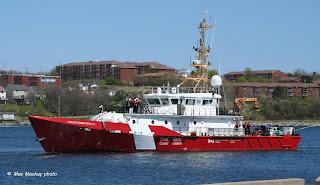 7. Private Robertson V.C.
But it did happen, the ship made it to the water and was whisked away to pier 9B where final touches will be made.
The first of nine offshore patrol craft for the Canadian Coast Guard, Private Robertson V.C. is a handsome looking craft, which promises to be speedy, but I worry about its sea keeping abilities in really rough stuff.
Posted by Mac at 3:01 PM