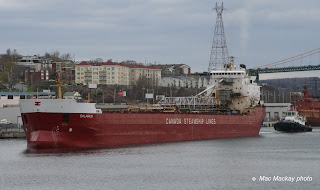 The bulk carrier Salarium finally sailed this afternoon after countless delays stretching over a period of weeks. The big CSLer, formerly Nanticoke is headed for the Magdalen Islands to resume her salt carrying contract after completing a refit.
The ship was finally ballasted down on Sunday, but departure times were cancelled yesterday and today. Even the 1600 sailing was delayed when the pilot boarded and had to order a tug. Atlantic Oak stayed with the ship on a stern line until she was down harbour. The tug was certainly necessary to get the ship out of her tight space at pier 9A, but apparently had not been ordered in advance.
Posted by Mac at 7:07 PM