The Stolt tanker Glory sailed this morning on a voyage from Rotterdam to Searsport. The ship is what is  known as a parcel tanker. It can carry 14 different types of cargo at the same time and has sophisticated pumping systems allowing it to discharge the cargoes independently.
This concept of parcelling was invented by Stolt Tankers founder Jacob Stolt-Neilsen of Norway, who was a ship broker in New York at the time. From a start in 1953 with one chartered tanker, he built the company up to the power house it is today with over 150 tankers and interests in terminals, tank containers, fish farms, etc., Read more at: http://en.wikipedia.org/wiki/Jacob_Stolt-Nielsen
As such a large company it is odd that we have seen so little of Stolt tankers in recent years. The ships normally operate on liner routes, following a schedule of dates and ports as they work around the seas of the world, so perhaps they just have had no cargoes to or from Halifax.
One cargo they used to load in Halifax regularly was tallow. This cargo, the product of rendering meat scraps, used to be stored in tanks at pier 20. However the tanks have long since been removed and that reason for calling no longer exists.

Glory was formerly called Stolt Glory until 2010-and it is odd that the name was changed, even though it is still in the Stolt fleet. Built in 2005 at Shin Kurushima Dockyard in Onomichi, Japan it is a ship of 20,095 gross tons, 33,302 deadweight.

Among the early Stolt tankers to call in Halifax was Stolt Argobay built in 1960 in Norway. It was a traditional tanker with island bridge. It was broken up in 1984. It is shown here getting away from pier 20 on a foggy day. 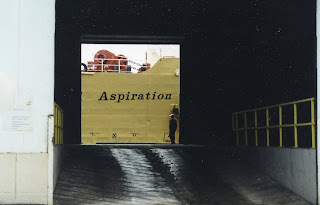 Stolt's distinctive putty/yellow colour scheme and lower case lettering of the ships' names made them favourite photo subjects. Their names were also distinctive in themselves giving pause for thought to some, such as this line handler waiting for the ship to berth at pier 20.