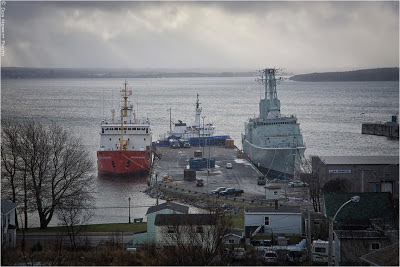 1. Safe in North Sydney [photo used with permission].
CCGS Sir William Alexander** (left) did not have a line aboard the ship at one any time. The tug Ocean Delta (at the end of the dock) did eventually recover the tow, after calling in air support, and they did reach Sydney Harbour.

Strangely muted comments by some official sources are underplaying the seriousness of HMCS Athabaskan's abruptly abbreviated trip from St.Catharines toward Halifax. They say it was never in danger of running aground on Scatarie Island. I would say that if your only alternative was to call in air support from Greenwood air base, then there was good reason to fear that the ship would run aground or sink before you reconnected the tow.
Now that it is safely berthed in Halifax {North Sydney!} the spokespersons are saying that they are waiting for good weather to complete the journey. If the ship were a merchant ship, the Department of Transport's Ship Safety inspectors would hold the ship in port until repairs were made.
However this is complicated, because repairs to navy ships are very different to what would be possible in a remote port with a merchant ship.Temporary repairs would permit a merchant ship to be cleared to sail to a port where permanent repairs could be made. Even though the ship is tied up at the Canadian Coast Guard Academy's College's dock in Point Edward I doubt civilian regulators will be anywhere near this one except on an advisory basis.The navy will be the ultimate decision makers on when and under what circumstances the tow resumes. (The dock is in North Sydney, not at the Coast Guard College)
Since the construction of naval ships is far different from merchant ships, even the type of temporary patching that could be done in Sydney might not be acceptable. However the navy can be creative and they may find a way to make the ship seaworthy. Normal damage control measures (applied in combat situations) could get the ship to a safe port, but with no navy crew on board and no ship's power, would these be possible? Stuffing a few mattresses in the holes and shoring then up with timber might have worked for Hornblower, but I'm not sure it will fly here.
No matter how they solve that problem, there is going to be a big repair bill ahead. 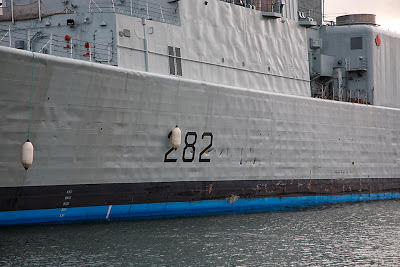 I can see up to eight possible perforations, which could be open to the sea (granted the ones I can see are above the waterline). These would certainly result in additional damage if not patched before sailing. More serious in the long term is a long scrape that has clearly distorted some plates, and likely damaged frames. Then there are all the dents, bumps and scrapes that may have caused additional damage.
Officials say they are keeping a close eye on weather before the ship moves, but my guess is that it may take more than good weather before this ship reaches Halifax.
Interesting that the tug Ocean Delta is still alongside.Perhaps Groupe Océan has not been fired after all. I hope not - it would seem only fair to allow them to complete job. And what other tug operator would want to take over a previously damaged tow? Most towing contracts are quite firm in taking no responsibility for the towed object short of gross negligence verging on sabotage, so Océan may well be in the clear.
Tugs will have to recover their towing line, several hundred feet of which is still attached to the ship, and will sail for Quebec as soon as January 3.
** conflicting reports here - some say the Coast Guard did and some say it did not have a line aboard. I have nosworn testimonials on this, but would prefer to believe that they did NOT.
The ship shown in the picture is CCGS Sir William Alexander, however other photos (which I have not published) show that it was CCGS Edwrad Cornwallis that was the ships one the scene after the tow line parted.
Posted by Mac at 11:06 PM