If we needed a reminder that fishing is dangerous work, two recent incidents will refresh our memeories:

News that the Bear Cove Point sank on Tuesday June 9 was reported by the Chronicle Herald late this afternoon. The crew of four were picked up by other fishing boats and landed safe in Riverport. 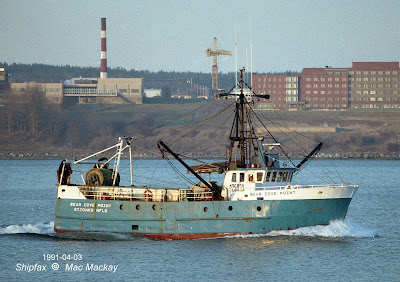 After drydocking at Dartmouth Marine Slips, Bear Cove Point sails from Halifax in 1991.


There has been no explanation of why the boat sank 175kn SW of Yarmouth in 20m of water., but the Transportation Board is investigating.
Built in 1987 by Glovertown Shipyards Ltd in Newfoundland Bear Cove Point was a 206 grt stern trawler. Its processing deck was enclosed and it was reported to be a good sea boat.

Its original owner was Thomas Fennely of St.John's but recently it has been  owned by Laurence Corkum Fisheries Ltd of South Ohio, NS.

Last Sunday night June 7, the ferry Princess of Acadia safely evacuated a crew member of the Digby fishing vessel Compass Rose II . Ferry passengers  included a doctor and nurses who assisted by giving medical assistance. Princess of Acadia used one of its lifeboats to remove the injured man. 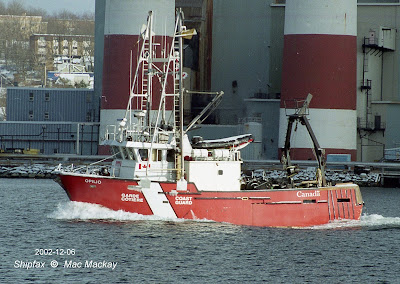 There have been several Compass Rose fishing boats from Digby. The current Compass Rose II is the former Dept. of Fisheries vessel Opilio. built in 1989 by Les Bateaux de Mer Ltée of Cocagne, NB. The hull is fibreglass reinforced plastic on an airex foam core.(Opilio is a species of snow crab). Based in Miminegash, PEI it visited Halifax from time to time until it was laid up in Petit de Grat in 2012. It was renamed 2013-04 until sold to Yarmouth Sea Products Ltd in May 2014.

Yarmouth Sea Products have recently acquired another former Fisheries Research vessel, Calanus which had been laid up in Sorel-Tracy, QC. 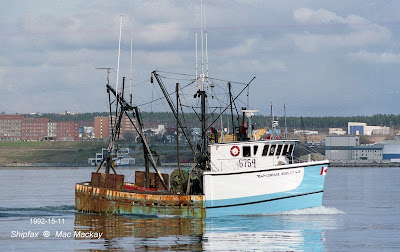 A previous Compass Rose II was built in 1983 by A.F.Thériault + Son in Meteghan River in 1983. It is now sailing as Atlantic Maverick out of Normans Cove, NL.
. 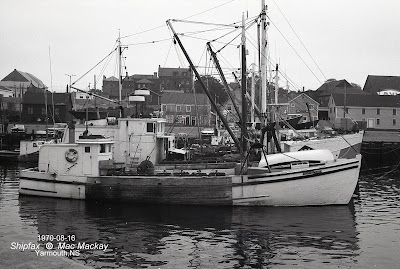 The first Compass Rose that I recall seeing was this delightful little scalloper, built in 1955 in Parkers Cove, NS.