After a lengthy conversion process, the Halifax based fishing company Clearwater Seafoods has registered their latest acquisition in Canada. Now named Belle Carnell and measuring 4,325 grt, the ship likely bears only a fleeting resemblance to its original look, since it will be used as a clam harvester, beginning in the second half of this year.

It started life in 2002 when its keel was laid by Malta Shipbuilding, in Marsa, Malta. At a certain stage the hull was towed to Ulsteinvik, Norway where it was completed by Kleven Verft. It was delivered in 2004 as a platform supply vessel of the VS470 Mark II type of 2,603 grt..
Named Siddis Skipper it worked for O.H.Meling+Co AS of Norway until late 2013 when Clearwater began the process of acquiring and rebuilding it.

Its large clear after deck has apparently been converted to a catching and processing area, but I have not seen the ship yet, as it is still in Santander, Spain where the conversion took place. However Clearwater has
converted other offshore suppliers to the same use, and they feature a large dredge apparatus mounted over the stern. 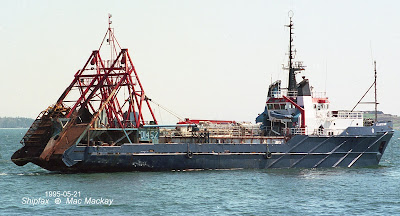 Although the new Belle Carnell will be much more modern, it will likely have a similar profile.