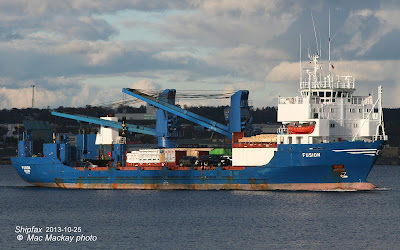 The weekly RoRo container service between Halifax and St-Pierre et Miquelon entered a new phase on Friday June 12 when Nolhanava ex Shamrock replaced Fusion.
Fusion has now been laid up at pier 33 after seven years of service (off and on) on the run.Shamrock, which was built for the service and operated from 2001 to 2004 is now back under the new name. 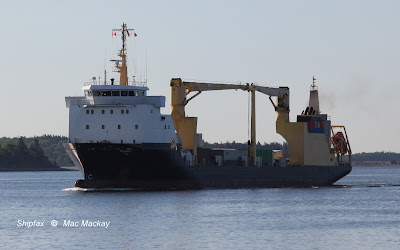 It returned to Halifax today after its first second trip. 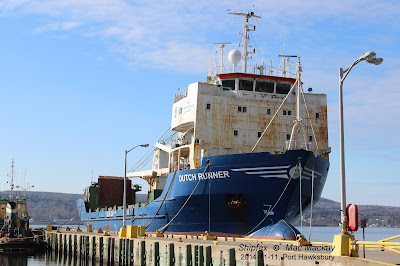 Dutch Runner has been laid up since 2012, first in Souris, PE, and since October 2014 in Port Hawksbury, NS.

In 2009-10 Fort Ross had a major refit in Europe, was renamed Fusion, and returned to the service in August of that year on what was understood to be a three year contract.
http://shipfax.blogspot.ca/2010/09/new-old-ship-on-st-pierre-run.html

In April 2012 Fusion sailed for the Ukraine where it went into another lengthy refit and returned in September. Its replacement at that time was Nils B.
http://shipfax.blogspot.ca/2012/04/nils-b-update.html

Fusion has run consistently on the weekly service, however it has been subject to some mechanical problems and in March 2014 was towed in to Halifax after three days adrift.and was off the service for three trips until April.
http://shipfax.blogspot.ca/2014/03/monday-roundup-admiralengracht-seattle.html
http://shipfax.blogspot.ca/2014/03/anne-small-cargo-ship-for-halterm.html

I covered the return of Shamrock as Nolhanava back in April
http://shipfax.blogspot.ca/2015/04/shamrock-coming-back-as-nolhanava.html

I did not comment on the ship's names however. The name Shamrock commemorated a legendary French trawler that worked out of St-Pierre for a number of years. It was the subject of a special postage stamp and a documentary.

As to Nolhavana I am stumped.Its possible that it commemorates a rum running vessel. They liked to have odd names, frequently with alternating vowels and consonants, but that it only a wild guess.
If anyone has any insights, I would appreciate hearing them.