As the cruise industry continues to expand and as the Esso refinery is no more, we have become accustomed to ever larger cruise ships and an endless parade of handysize product tankers. Today the table turned somewhat as the large tanker Princimar Joy and the small cruise ship Saint Laurent arrived.

Princimar Joy, built in 2010 by Jiangsu Rongsheng in Rugao, China measures 83,850 grt, 156,493 dwt. Princimar Maritime is based in Southport CT, but the ship is managed by Northern Marine Management of Clydebank, Scotland.It flies the Marshall Islands flag.

With stern escort tug Atlantic Oak in close company, Princimar Joy anchors in number one anchorage. Esso's Imperoyal facility in the background no longer refines oil, but there is no sign of the promised dismantling.

The ship was at anchor for little more than two hours- just long enough for the Canadian Food Inspection Agency to conduct an Asian gypsy moth inspection. It then sailed for Saint John, NB with is cargo of crude oil.

Following soon after was Saint Laurent:

Saint Laurent began life in 2001 at Atlantic Marine in Jacksonville, FL as Cape May Light, one of a pair of "retro" look pocket cruisers that attempted to recapture the bygone days of the bay, sound and river passengers ships, such as CSL's Great Lakes and St.Lawrence cruise boats.
Cape May Light operated for a few months in 2011 until the 9/11 terror attacks resulted in the bankruptcy of several cruise companies, including its owners American Classic Voyages. Both Cape May Light and the uncompleted sister Cape Cod Light were repossessed by the shipyard and eventually sold by the U.S. Maritime Administration in 2008 to Clipper Cruises Ltd (managers International Shipping Partners). Renamed Sea Voyager the former Cape May Light was chartered by the United Nations to house aid workers in Haiti in 2010.
It received a Canadian coasting license to house construction workers at Deception Bay, Nunavik for Xstrata's Raglan (now called Katinniq) nickel mine's port expansion from July to November 2011.
After another period of layup Fleetpro (formerly International Shipping Partners) announced in September last year that a charter had been agreed with Haimark Line, a UK company. A $3.5 mn refit followed and the ship entered service this spring as Saint Laurent cruising the east coast, St.Lawrence and Great Lakes. It will move to the Caribbean and South America for the winter. 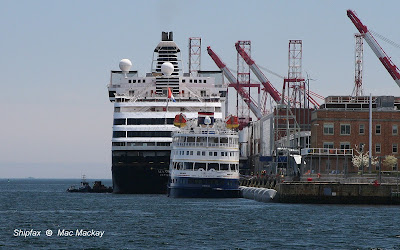 Saint Laurent is dwarfed even by the modestly sized Maasdam as it nestles up to pier 21.

Fleetpro are the technical and hotel services managers, as they are on the Nova Star ferry among numerous other ships:
https://www.fleetpro-psm.com/press-release/ms-saint-laurent-proudly-sailing-fleetpro
Haimark are the cruise operators:
http://www.haimarkline.com/

Designed by Guido Perla & Associates, for 227 passengers and 77 crew, it is now marketed as 105 staterooms and all new expedition type amenities.It is powered with azimuthing stern drives, driven by two main engines at 1970 bhp each and a 1,000 bhp bow thruster.

During some refit it lost its forward dummy funnel, but its prominent steering pole was extended, and it received some cranes to handle expedition boats, bridge awnings and other minor adjustments. 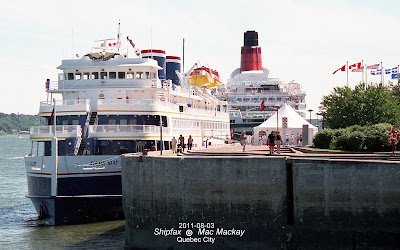 In its only season of operation as Cape May Light it visited Quebec City and tied up at the Pointe-à- Carcy sea wall astern of Queen Elizabeth 2. Note it has a forward dummy funnel and short steering pole. 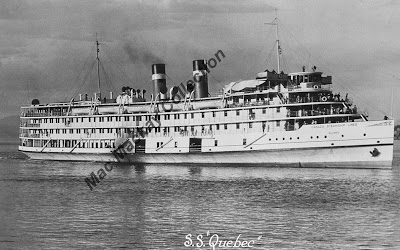 This may be the look they were trying to achieve in the original design. I will let you be the judge.
Canada Steamship Lines' Quebec and its fleet mates were the epitome of  gracious cruising on the St.Lawrence, while also carrying some freight and vehicles.
This photo was taken about 100 yards from the photo immediately above it.