The St-Pierre et Miquelon feeder service was expecting to inaugurate its "new" ship today, marking the end of the line for the veteran Fusion. When Fusion loomed out of the fog this morning, it headed to pier 31 41 to unload. At the same time Nolhanava ex Shamrock moved from pier 34 to pier 36 to begin loading. 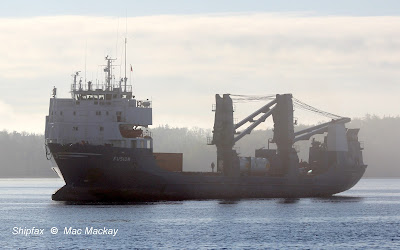 A deck hand heads aft to prepare for tying up at pier 41.

At some point during the day the loading of Nolhanava was cancelled and instead it now seems that Fusion will be making at least one more trip.Nolhanava arrived April 23 and there has been activity on deck and elsewhere indicating repairs and maintenance to ready the ship for its return to the St-Pierre run after an 11 year absence. See addendum

Speaking of fog the intense blanket was only beginning to burn off this morning as Selfoss arrived at Halterm pier 42 a few minutes before the Fusion. 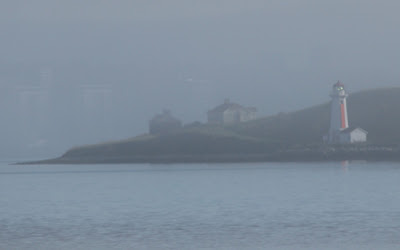 As George's Island becomes visible, the fog still conceals most of the Dartmouth side of the harbour. No audio on this shot, but the ferries were sounding their fog horns. 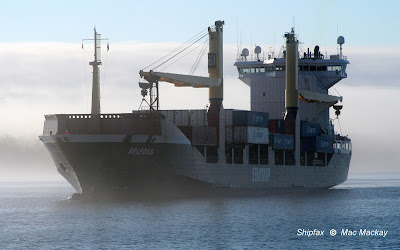 Selfoss emerges from the fog. A bit of photo editing shows more of the ship than I saw.

The fog soon burned off completely, and at Pier 9c there was good news for the Harefield as some new component arrive in a large crate. Work under the ship's stern has been going off and on, but it was apparent that they were waiting for something to be manufactured. 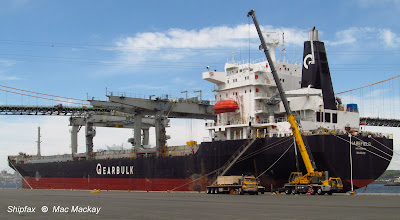 A crane gets ready to offload a crate, positioning it so that the Harefield's engine room gantry will be able to access its contents. Note the exhaust scrubber adjacent to the ship's funnel, partly blocking the Gearbulk logo. It allows the ship to burn heavy fuel and still meet emissions regulations.

Addendum:
Saturday update: Nolhanava idle at pier 36, Fusion loading at pier 37 Saturday morning, with a sailing time scheduled for later in the day. 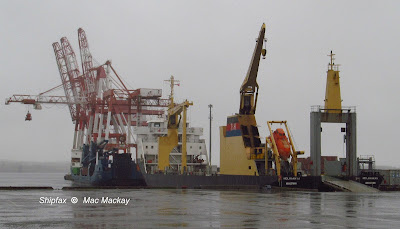 No fun: Fusion loading in the driving rain, and Nolhanava idle.