Irving Oil's tanker East Coast made a brief pit stop today for bunkers en route from Saint John, NB for Quebec City. This is the first time I've seen the ship since it returned last week from a refit in Gibraltar (via Amsterdam) , during which it was refitted with an exhaust gas scrubber [see added info below]. The unit will allow the ship to burn heavy fuel while still complying with newly introduced emissions regulations.

Fitted aft of the ship's funnel, the apparatus is enclosed in a large superstructure that is painted white, but with the blue of the funnel cap extended across the top. Installation necessitated relocating the ship's lifeboat, which had been on the centre line aft, and other work that is perhaps not obvious. 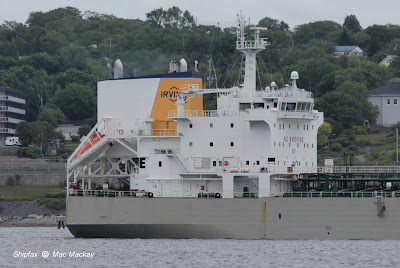 One of four sister ships operating for Irving Oil on long term charters*, it was brought to the Canadian flag last November and its name was changed from Nor'Easter. For a time it still carried the identifying letter "N" on its superstructure, but I see that has now been replaced by "E".

Sister Acadian has always traded under the Canadian flag. It arrived Friday and was also in port today, sailing from anchorage as East Coast arrived. Presumably it and its sisters will also be similarly converted, since all are trading in areas where new emission requirements have been instituted. Many marine engines do not convert well from heavy fuel to diesel, and the exhaust scrubber is the solution to save the ship's engine from damage. 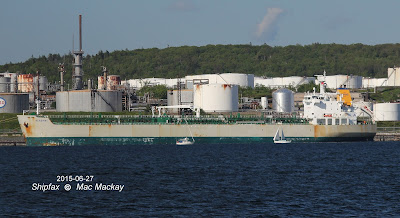 Acadian at Imperial Oil yesterday, is yet to be fitted with a scrubber.

All four ships were built by Hyundai Mipo Dockyard in Ulsan, South Korea in 2005. East Coast measured 23,356 grt, 37,55 dwt when built, but the new structure will increase its grt if it is re-measured.
New England and Great Eastern continue to trade under the Marshall Islands flag, operating from Saint John, NB to east coast US ports.

*Irving Oil appears to have other ships under charter too, but they are not identified as Irving charters. Owners of these four sisters, FB Shipping, part of the Vroon Tankship group, have half a dozen other tankers, and at least one, Iver Progress, seems to have taken up the spot that Nor'Easter once filled.

Added Info:
Marine exhaust gas scrubbers spray sea water on exhaust gas, forming sulphuric acid, but the natural salinity of the water neutralizes the acid and the wash water can be discharged back into the sea without environmental issues.
.
Posted by Mac at 7:34 PM