Zim out, Zim in with fog


Dense fog descended on the south end of the harbour when it was time for Zim Constanza to sail this afternoon. The incoming Octavia, also for Zim, was inbound at the same time and the two ships passed without seeing each other - except on radar.
Their automated fog signals were well synchronized, and from my vantage point the sounds bellowed most impressively and continued to echo back and forth from the fog and the land for several seconds after the initial blasts.

Longshoremen are standing by to let go the lines as Zim Constanza readies to sail. 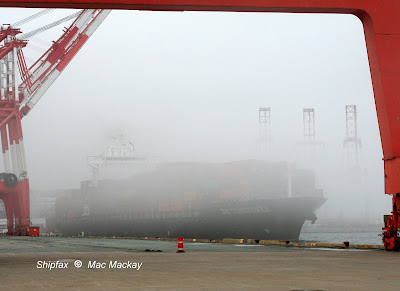 Once clear, the ship was almost totally enveloped in fog. 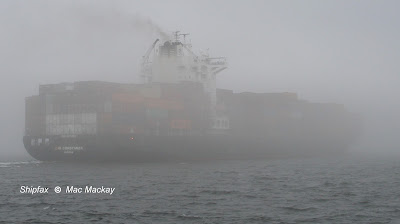 This what I saw, but the camera could be coaxed into revealing a bit more: 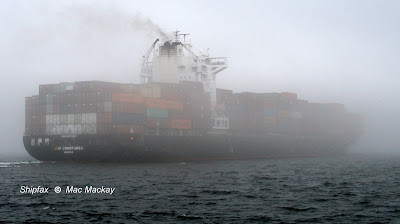 Zim Constanza dates from 2010 when it emerged from the Jiangsu Yangzijiang Shipyard. It measures 40,252 grt, 50,107 dwt with a capacity of 4256 TEU, including 698 refrigerated. On June 28, 2010 it initiated a new Zim service from the Mediterranean to Halifax, New York, Savannah and Kingston, Jamaica before returning to Tarragona and Haifa.It flies the Liberian flag for Rickmers Ship Management (Singapore) Pte Ltd.

The somewhat larger Octavia barely emerged from the fog.

what the camera revealed.

The tug Atlantic Larch, which was alongside, but barely visible in the photos above, is swinging the ship around, 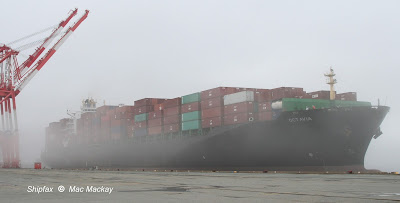 and it almost disappears as it comes alongside.

Octavia was built in 2005 by Hyundai Heavy Industries in Ulsan for the Herman Dauelsburg company under the Atlantic Lloyd banner. Its capacity of 5117 TEU, including 500 reefers, is carried in 53,807 grt, 66,501 dwt. The ship is registered in Majuro, Marshall Islands.

Earlier in the day it was quite clear as Toscana worked cargo at pier 30-31. 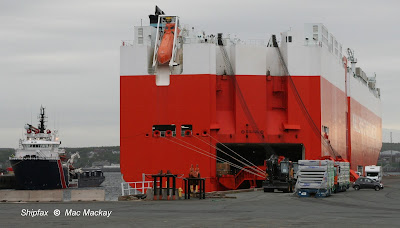 The supplier Scotian Sea at pier 27 unloads some special gear as Toscana unloads.


Toscana was the last of a series of ten sister ships built for Wilhelmsen Lines by Mitsubishi Heavy Industries in Nagasaki. Completed in 2009 by Mitsubishi Nagasaki Shipyard and Engineering Works, it measures 61,328 grt, 22,144 dwt and has a capacity of 6350 CEU. It is specially fitted to carry other types of RoRo and project cargo, and has a 307 tonne capacity stern ramp.
.
Posted by Mac at 10:02 PM